Tough day in the Leven River.

Tough day in the Leven River.

Tough day in the Leven River..

Reasonably fine weather was forecast today and better still one of my favourite rivers had finally dropped to a safe wading height for the first time since the trout season opened back on the 4th August. Gusty winds were supposed to arrive as the day went on so I hit the river just on 9:45am and found it was running quite nicely and a much lighter tannin colour than I had expected. As much as I love fishing this river I still prefer it when it's running a medium to dark tannin colour as that's when the trout seem to be more aggressive than when it's light tannin water. I started the spin session off with a Mepps #1 Aglia Furia as I thought this lure would be better suited to the partly overcast conditions plus it's also a good all round spinner that's a regular trout catcher. It wasn't long before I spotted a decent size brown sitting some three meters out from the river bank, as I went to cast the lure it spotted my movement and moved into deeper water. I slowly fished my way up a long wide deepish stretch of river and had a couple of follows from some non aggressive trout, it was time to try another lure. I tried several different spinners all with the same results, follow after follow, I even tried a variety of hard body lures even they couldn't draw the attention of a single trout. It was back to the Mepps spinners as I moved into the shallower fast water runs, this time I went for a small #00 copper Aglia which did attract a couple of trout but no takers. 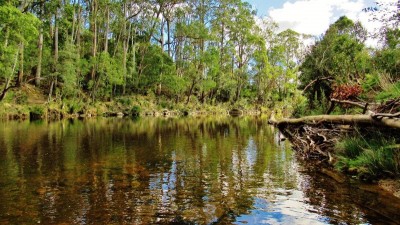 Beautiful calm conditions to start with.. 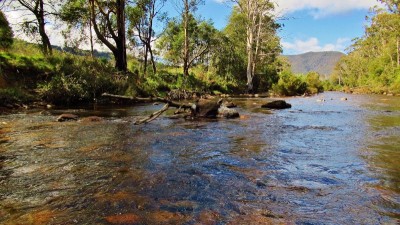 Moving into the fast water..

The fast water runs are perfect for trout too but for some reason they weren't here in bigger numbers like they normally are. Maybe it was due to the fact the water temperature was still sitting on seven degrees but I felt the problem was the South Easterly breeze that was now gusting at around 25 kph or more and coming straight down the river head on. There's a saying that an old fisherman told me once “ when the wind's from the East, the fish don't feast” and I've found that to be right on the money many times. Casting the lightweight spinner was becoming near impossible at times when I had to wait for a lull in the wind gusts before getting a cast in. A few times I was caught out and left the cast a little too late and the wind hit as the spinner was sailing through the air, it was carried way off line into foliage on the river bank. I could have gone to a heavier #1 (3.5 gm) blade spinner but I prefer the smaller ones in the fast water here as they have always produced a few trout on previous trips. Call me stubborn if you like, but that's just how I play the game. The Okuma Celilo Finesse 6'6'' ULS 1-3kg trout rod & Okuma Inspira ISX-20 spinning reel was getting a good workout even though the trout weren't around. 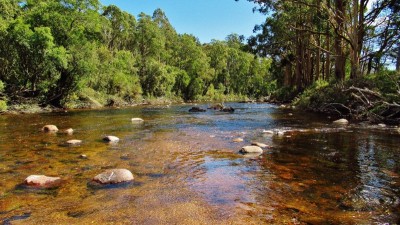 All this water fished without a trout..

I had been slowly fishing my way upstream for nearly two hours without a single hook up let alone a hit and miss when I came to a back water that had a nice flow of water running through it. It was here I decided put on a well used #00 gold Aglia Mouche Noire another of the small Mepps lures that has worked well in this river before. The third cast close to the left side of the back water the spinner was taken by one very aggressive trout, it was finally trout on. After two hours and ten minutes of fishing I had my first trout of the session hooked and landed, what looked like being a donut day was gone & what a relief that was. The 8th October last year was also my first trip to this river and it was my first “donut” for two seasons so you can see why I was a little relieved. 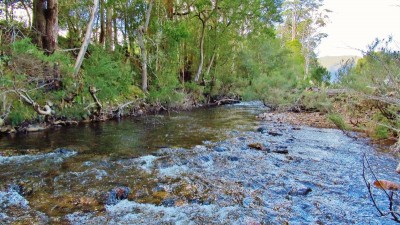 The back water I moved into.. 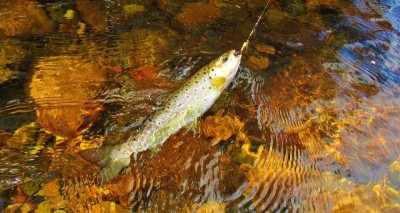 Finally a trout is caught..

The next fast water run in this shallow back water also looked good at the top end where another small flat water flowed into it. The first two casts were to the left hand side that was marginally deeper that the water on the right. Nothing happened, no hits or follows, then with the next cast into the very shallow right hand side it was fish on again. The little Aglia Mouche Noire spinner was grabbed by one very solid brown that had been sitting in four inches of fast water. This trout gave me merry hell as it tossed and turned while I scrambled to get my camera out to video it. I was a little worried that this fish may toss the spinner while I was filming it playing up, it was well hooked and stayed on all the way into the net. It was a beautiful fish too and I noticed it had a large scar behind it's dorsal fin which more likely was caused by a Cormorant. So in ten minutes I had caught and released two trout with the second one being the best fish weighing in at 535 grams, that fish made my trip here all worthwhile. Five minutes later I was onto another brown, this fish was taken on the very first cast into the tail end of the following stretch if water. So with three trout taken in fifteen minutes and over a distance of around twenty meters it was a real turn around. I had come to the end of the back water run so I made my way back down to the area where I could get back into the river and continued to slowly fish my way back up the river. 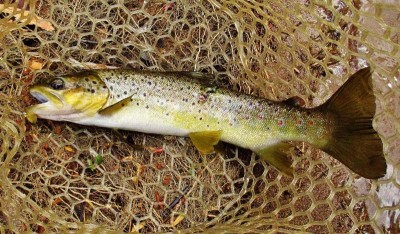 The second & best fish of the session.. 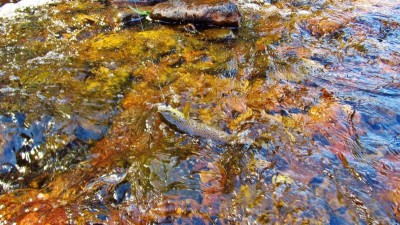 The third & last trout of the day.. 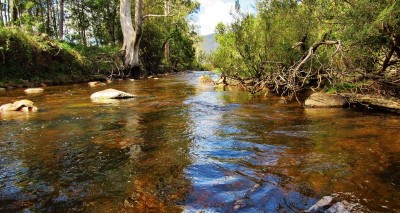 This back water gave uo three trout in quick time.

The wind was still howling straight down the river, it was all back to normal again with no signs of a trout. It took about an hour before I finally had a couple of follows from a small brown in a shallow fast water to the right of me. After several casts into another flat water on my left that had a nice bubble line on it a small brown took the spinner but tossed it as quick as it took it. After that I had a few more follows in another wide medium deep stretch of water, those trout never showed any signs of aggression. It was close on 1:30pm when I decided enough was enough, no way were the trout in the main river going to be caught today, it was time to head back to the car. I had planned to try another good stretch of river a few kilometres downstream, by the time I had walked back to the car I was buggered, my day's fishing had come to an end. I'll certainly return here in a weeks time all going well and I'm sure the return trip will produce more trout than it did today. One thing is certain, it won't be when the wind is blowing from the East... 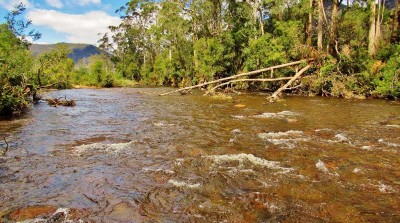 This was the last stretch of fast water I fished..

Adrian, reading your report, I could feel the "tough" in your day. It really seemed that the stars were aligned but for someone else and you were just left out. Very happy for you that the three trout came in quick succession, that would have been satisfying rather than the three trickle over the whole trip.

Well done on the effort, Adrian

Slow start but you managed to catch a few. And in a place like that, portrayed by your great photos, I wouldn't mind a donut or two

But one donut in two seasons?? Wow!

That fish with a scar, it's quite a bit scar and looks healed. Probably happened when it was still young. Strong resilience that fish got. Anything to survive the wild, but fooled by Adrian the King of Aglia. Gotta love the Aglia 00 in shallow fast water.

Great report and pics mate.
Enjoyed the read like always!
You still managed to get a few so not a bad day

Thanks Guys, anything beats a "donut", that river doesn't really fire up until late November onwards.. So doubt I'll be back in it until then..
Spot Seb, can't beat the little #00 Aglia in shallow fast water runs that's for sure..
cheers
Adrian
'' Mepps Spinfishing Guru Tasmania '' Tackle Tactics, Okuma, Mepps & Platypus lines Pro Team Member