Floated a balloon out with a mate for a few hours last night with the favourable wind. Not a touch. Did pick up 1 occy, 1 cuttlefish and 4 squid while killing time. Other than a few banjos and skates, a couple of other squid and some good sized yakkas and Salmon the whole pier was fairly quiet given it was still almost shoulder to shoulder at 2am. 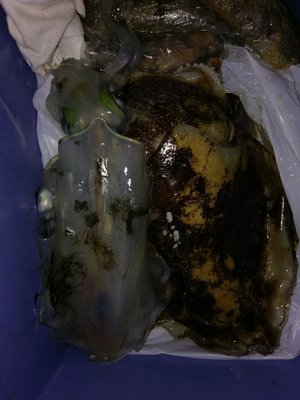 That's ok catches to me. Do you eat the Cuttle's? Love squid and occys but never tried cuttles. Any good?
Top

Apparently like squid. Never tried it and this one will become Whiting bait
Top

It's just the same as squid just bit thicker
Top

i think it smells alot more/better for bait
Top

How do you deal with water traffic while ballooning? or only after dark?
Chasing LBG and sharing a love for the Martial Arts, everywhere, all the time.

Open offer for a free hour of self defence with me to any Fishvic member, PM for details.

DougieK wrote:How do you deal with water traffic while ballooning? or only after dark?

I used to ballon off Rye pier until about ten years ago; always late night fishing for shark. The last two times in a row saw me lose 2-300 metres of 50lb braid due to boats hitting the floating braid. I didn't bother going back there after that.

It's not their fault, they obviously cant see the line or balloon, just bloody frustrating, especially on those warm sharky nights. Same thing happened in daylight near Pulpit by an abalone boat who you'd reckon would be aware of fisho's in that area. And again at City Rocks by a couple of d1cks in a tinny. I've also been done in the KIlcunda area, and the last time was at the Ninety Mile beach late last year.
Top

DougieK wrote:How do you deal with water traffic while ballooning? or only after dark?

Got there at sunset when on water activity died down. Only issues was divers swimming around and 1 person casting straight over the line as it was being let out the first time.

Even though it was packed to the rafters no one had issues other than the rare tangle or jumped in on others. It's the first time I've pier fished in years and was pleasantly surprised. Even a couple of guys let me jump back into the weed patch I plucked the cuttlefish from after swimming it to someone with a net as they set up for yakkas. Offered them a couple of the squid I plucked from under their noses but they didn't take them. Faith with pier fishing almost restored
Top
Post Reply
12 posts

Return to “Rosebud to Sorrento/Portsea”