All topics related to fishing and angling in Victoria that don't fit into one of the other forum categories.
Post Reply
28 posts

Do you get tuna near Gabo island?
Top

I’ve got some video on my phone showing the ramp and how swell rolls in, just tried to directly upload site via iPhone and no dice. Will have a look later and see how I can upload

If you want to head to the shelf why not drive to Eden, it’s closer, ramp and Bay is easier to head offshore if your inexperienced (I’m not saying you are)
Top

You may actually be right, I always thought Eden was the closer. 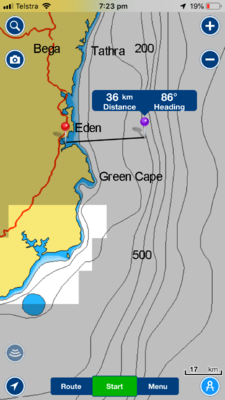 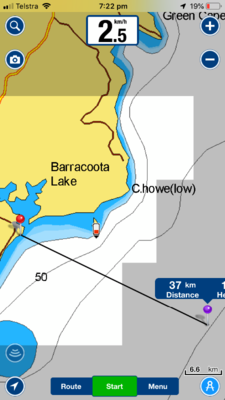 Note with those pictures if you actually stretch the pins Mallacoota is closer, Eden has the bay portion which makes it slightly longer in my view.
Top

What program do you use for that?
Top

Navionics app for iPhone, there in app purchases and from memory works out to around 20-25 dollars. I find the app really good for planning and reviewing gps locations
Top

Ok I'll look into it thanks
Top

smile0784 wrote:I was told the shelf is closer at Mallacoota then bermie and eden

Definitely not closer than bermi. Pretty sure bermi is about as close as the shelf gets to the main land. From memory around 20ks. Pretty sure coota and eden fairly similar distances as the previous post showed. You can measure distances off navionics fairly accurately.

I’m headed to coota for Australia Day weekend no boat unfortunately but will head down to the ramp for a look. It’s normally a pretty good ramp. They built a big rock break wall running out of the ramp for some way making it much better than the old setup. As others have said it can’t silt up though.
Top
Post Reply
28 posts