One trout caught & another gets its revenge..

One trout caught & another gets its revenge..

Very wet & windy weather was the forecast here today, well by 2:30 pm I was sick of waiting for it to arrive so headed over to Merseylea for a short spin session. As soon as I arrived so did the rain, thankfully it was only light and wasn't a problem. As the time passed by so did the rain, the trout were few and far between here too. All I could manage was three hook ups for just the one small brown landed. Another one had its revenge with me as I went to lift it from the water it tosses the lure which in turn sliced through my finger. All good in the end as I always carry a small first aid kit in my vest for this very reason. I often have to yank a treble hook from a lure that has embedded itself in a finger or some other part of my hand from time to time. 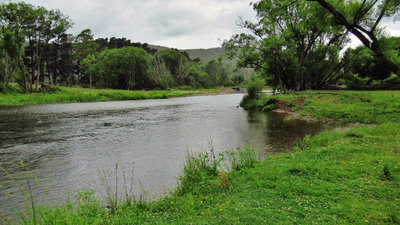 Dull & damp conditions to start with.. 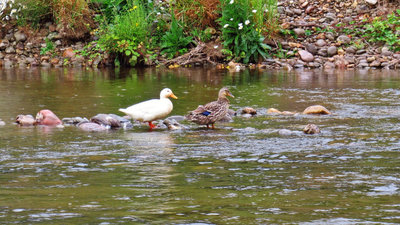 Pair of ducks in the river.. 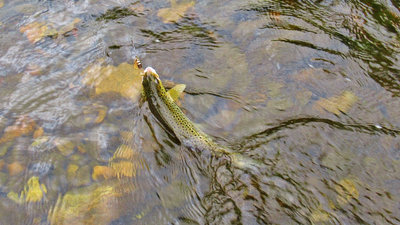 The one & only trout caught & released.. 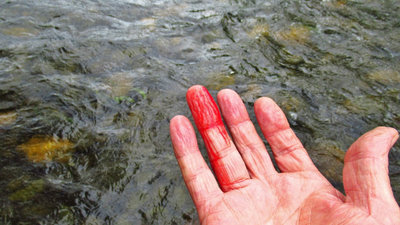 Trout had it's revenge..


The river bottom was in pretty poor condition here as well with a lot of brown algae covering the rocky bottom. Every time the lure touched a rock it was fouled by the algae. I did have a few follows, other than that it wasn't a very good spin session with the trout so few & far between.. I tried a couple of hard body lures as well in a couple of the wider slow flowing runs & never sited a trout. They continued to get fouled by the brown algae as well so I didn't stay with them for all that long. Today I fished above the middle bridge at Merseylea, this is my third or forth trip to this area and each time it's fished poorly. I'm not sure what the reason is in the Merseylea area as the whole area has fished poorly right from the start of the season, in six trips I've only caught thirteen trout. The Mepps Aglia Furia was the lure that caught the trout & sliced my finger too, the little Okuma Ceymar C-10 reel & Okuma LRF rod worked well as it always does.. 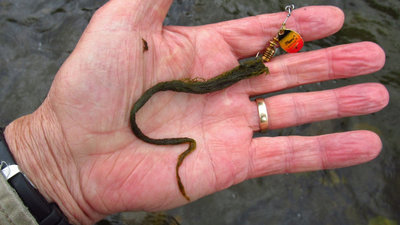 Lures kept getting fouled by this algae.. 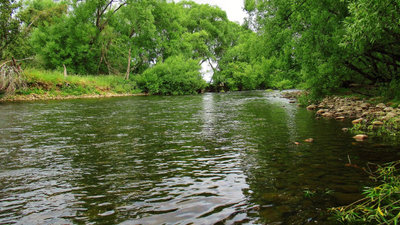 Beautiful stretch of river but no signs of trout.. 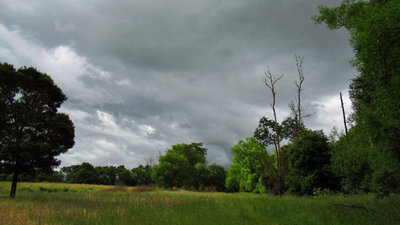 Weather moving in again as I head back to the car..

** Here's a short video clip of the spin session.. My little remote controlled camera arrived today, so will try it out in a day or two.. :thumbsup:

Good read as always Adrian. Even though the fish aren't rolling in, it beats sitting on the couch.

I got a treble in my thumb the other night.. Way past the barb.. It wasn't fun at all.. But after landing a couple nice EPs and Yellow belly i forgot all about it!

Thanks Anth, yes I usually have to remove a treble hook from a finger several times throughout a trout season.. got pretty good at removing them now days..

It's okay with the blade spinners, but the hard body lures are the worst with have two sets of trebles on them, one day I yanked the treble out only the set the other trebles in my other finger.. :oops: :oops: 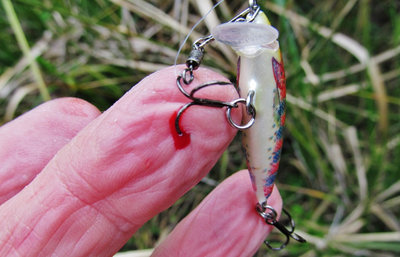 Quite often have this problem throughout the trout season.. 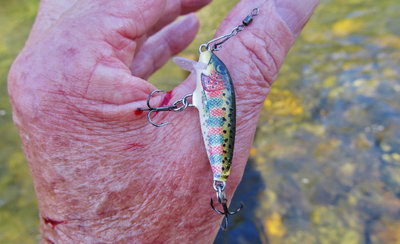 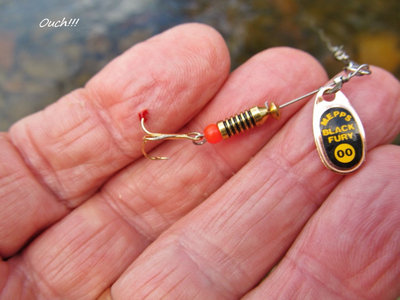 Topped of with the little Mepps black fury spinner..

Great read as always mate.
I haven’t had a treble in my hand or finger for awhile but remember what it’s like.
Enjoyed the vid as well!
Cheers :thumbsup:
Top

Thanks LX, touch wood you don't have a treble in the finger or hand for a long while either..

I had a treble in my thigh . was pretty painful.
My brother in law laughing in the background didnt help ease it.
There is always more to learn , fish to catch , places to see and friends to make.
Top
Post Reply
6 posts • Page 1 of 1