Hi all, I am fairly new to fishing (took it up during covid) and need some help with my Garmin 7" Echomap UHD 75SV CelarVu.

The photo above is a comparison of my sounder image (the two photos on the left) vs a professionals photo on the right.

Then I went out on my kayak and it was so hard for me to find the fish. On my sounder everything seemed so much smaller on the screen and I could barely ever find any marks and when I did they were 1mm - 2mm wide on screen and extremely hard to see.

It seems his screen is just so much clearer than mine and the image appears to be wider on screen allowing you to easily see marks. I had to change my colour to the blue screen to even be able to see those dots on the left image.

Since then I have done more research and it appears my brightness may have been up too high (I thought it was screen brightness like a dummy)? Also my scroll speed was on 5 which I have now switched to auto.

Has anyone got any tips to help me set up my sounder so I can better replicate the image on the right?

Thanks in advance.
Top 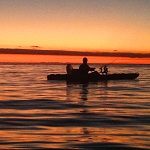 It looks to me that you have your gain/sensitivity too high and its just picking up clutter in the water column. I've used humminbird and lowrance in the past and with both of those I found taking a minute playing woth settings when I first launched and turning everything up until there was clutter and then backing it off so there was only a little bit made it the easiest to see fish on the screen. Depending on the speed you are moving down downvu will show up fish as dots or "jellybeans" rather than arches when underway. It appears the photo you have sent is fish moving through underneath a stationary or drifting boat
Youtube channel:Hawkesy Fishing
Top
Post Reply
2 posts • Page 1 of 1