A recent fisheries survey in Port Phillip Bay has recorded the third highest abundance of baby snapper since monitoring began nearly 30 years ago.

“Coupled with record abundance of baby snapper detected back in 2018, the two strong year classes combined should see terrific snapper fishing for the next decade,” Mr Dowling said.

“Two of the bay’s best three snapper spawning events in nearly 30 years have occurred in the last four years, so recreational fishers who love snapper have a lot to look forward to.”

Strong spawning of iconic snapper is fantastic news for recreational fishers and seafood consumers, who can look forward to fresh Port Phillip Bay snapper from the eight remaining commercial line fishers following the end of netting in the bay on 1 April.

Scientists undertake the surveys of baby snapper in March every year and know to expect variation in spawning success depending on environmental conditions. The surveys measure the abundance of newborn snapper between 3 and 10 cm that have survived from the previous spring-summer spawning.

Port Phillip Bay is the most important spawning area for snapper in central and western Victoria and the record 2018 year class will begin to join the adult spawning migration from around 2023/24 onwards. In the meantime, recreational fishers can enjoy great fishing for pinky snapper as most of the 2018 year class are now larger than the legal minimum size of 28cm and widely distributed.

Recreational fishers have also recently celebrated the installation of a kingfish reef near Port Phillip Heads and other reefs at several sites near Geelong and further afield at Dromana and St Kilda. Launching a boat is now free too and facilities are being improved across the state including boat ramp upgrades, new fish cleaning tables and more fishing platforms.

Mr Dowling said there has never been a better time to be a recreational fisher in Victoria with record fish stocking, commercial net fishing buy-outs in the Gippsland Lakes and Port Phillip Bay, a new fish hatchery at Arcadia, better access and facilities, and free fishing events for newcomers to the pastime.

Quote attributable to VRFish Chair Rob Loats
“This is wonderful news for saltwater anglers because snapper are an icon of our bay and immensely popular.”

Quote attributable to Futurefish Foundation Director David Kramer
“A healthy snapper fishery is vital for Victoria’s recreational fishers and the thousands of jobs that rely on them in the fishing and boating sectors.” 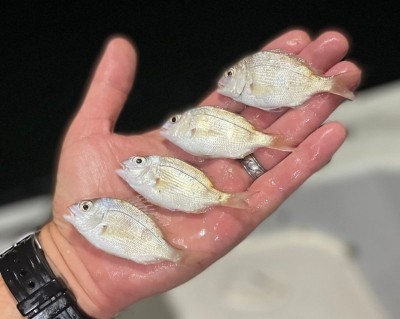 Is that the new legal size?
OF ALL THE THINGS I LOST, I MISS MY MIND THE MOST.
====
Words of wisdom:
"I will never argue with an idiot. He might drag me down to his level then beat me with experience"
====
Top

There is always more to learn , fish to catch , places to see and friends to make.
Top

Only to the fork in the tail mind you...
He who has the most fishing rods WINS !

At least not to the gills like gummy measurement.
OF ALL THE THINGS I LOST, I MISS MY MIND THE MOST.
====
Words of wisdom:
"I will never argue with an idiot. He might drag me down to his level then beat me with experience"
====
Top

Be a good few seasons coming up then for sure.
Still learning to Anchor