Victorian recreational fishers can look forward to again casting a line for Murray cod anywhere in the state.

“Cod opening is keenly anticipated by thousands of fishers every year because they’re an iconic native species caught in beautiful lakes and rivers, often with family and friends,” Mr Dowling said.

“One of the best Murray cod fisheries in Victoria is Lake Eildon, which has been stocked with nearly three million cod fingerlings over the last 30 years, primarily funded by recreational fishing licence fees.

“Freshwater fishers are now regularly catching trophy metre-long cod with a lucky few encountering giants up to 120cm, considered the fish of a lifetime.

In more good news for Murray cod fishers, Lake Eildon will welcome an exciting new two-year research project this summer to unlock some of the mysteries about cod movement into the Goulburn River above the lake.

The study will determine if cod in the upper Goulburn River are an active part of the Lake Eildon population or a distinct one of their own.

“20 Murray cod over the minimum size of 55cm will be tagged with acoustic transmitters that emit a regular ‘ping’ as the fish swims,” Mr Dowling said.

“Listening stations in the Goulburn Arm of the lake and up the Goulburn River will detect these ‘pings’, recording individual fish movement, depth and speed every time a tagged cod comes within range of a station.

“Keen cod fishers will participate in the project too by helping monitor tagged cod movement, ensuring strong engagement with those most passionate about wetting a line for the species.”

Mr Dowling said the two-year project is a terrific example of applied research that will improve knowledge for recreational fishers and fisheries managers, all of whom want to see Lake Eildon’s cod fishery go from strength to strength in the years ahead. Learn more about the project at www.vfa.vic.gov.au/codtracking 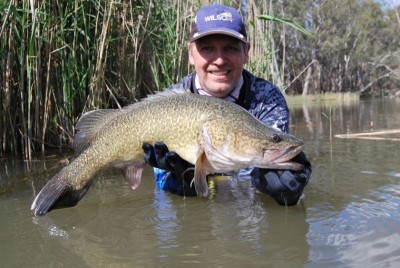