I was going through my trout reports from way back in 2013 and came across this one that I thought would be a change from a trout report..

It took me until 2.00pm today to recover from yesterday's spin session in the upper Mersey River before deciding to try the lower section in the Kimberley area. With my lower back not being all that good I took a few painkillers to help numb my lower back before I left home. The track that I normally drive to the river was really cut up so I decided to park the car then walk the 100 meters to the Mersey. Once there I couldn't believe how much the river had changed since the last big flood a few weeks ago. One whole section of river bank that was lined with wattles was gone and the river had changed its course here as well. So where I would normally enter the river I couldn't do so any more and I had to bush bash my way to get to the river a little further downstream. Once there it was fine and easy to enter the river, but the rocky bottom was just like the upper Mersey covered in slime and slippery as ever. This I didn't need at all, this is what really knocks my back around, it really jars the back every time one slips and slides on the rounded rocky river bottom. 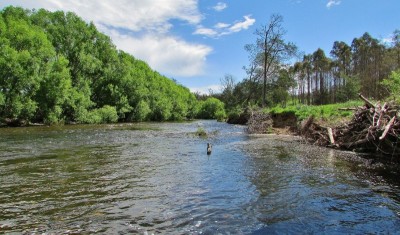 The river was flowing faster and a little higher than the upper Mersey and that's because of several other small rivers and streams that run into it down this end. Still it was running clear and looked good and so I was into the first section of fishy looking water and stuck with the same little 40 year old spinner that did the job for me yesterday. Not a sign of a fish in the first couple of sections of river which was a little disappointing as it looked really good too. The next area of the river was much wider and a little shallower, plus I noticed a couple of small fish jumping from time to time which was a good sign. Not that these fish would normally take the lure when they're jumping and feeding on small insects, but there may be a few other fish in the area that will hit the lure. After several casts across the flow and then letting the spinner drift with it and a slow retrieve I had a hook up. It wasn't a big fish but it was a typical river fish that was full of fight, it was a small beautifully coloured rainbow. The colour of this fish was really different from most rainbows that I have caught in the Mersey as it had a real tinge of yellow along it's flanks. I've seen photos of rainbow trout with this colouration on them but have never caught one before today. A quick photo of this little fish and I was off working the river once more. There were still fish rising and jumping in a few sections but I couldn't manage a hit at all. 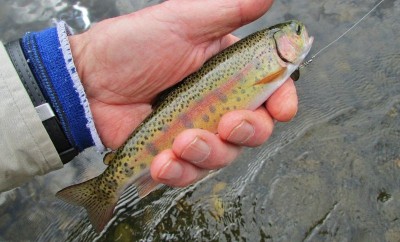 The one and only trout caught today. 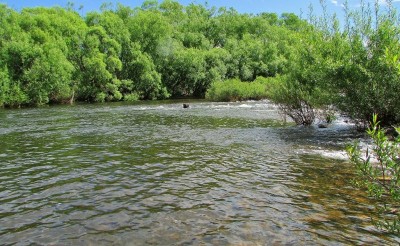 I decided to head up a small back water of the Mersey and give that a go as there was some reasonable flow in it and I thought it may be worth a try. I have fished this back water on several trips here and it often gave up a fish or two, so I had nothing to lose. It is just like a small stream that runs for around 500 meters from further upstream of the Mersey and is around 300mms deep in most sections. I worked it all the way up to where it starts for just two hits and misses, but at least I did have a couple of hits. Back into them mainstream now and still seeing a fish rising here and there all I could manage was another few hit and misses over the next 600 meters or so before I finally hooked a nice solid brown. This fish made two fast runs before leaping and throwing the spinner. That wasn't part of the plan, that's for sure! I had now been in the river for a couple of hours and was thinking it's about time to call it a day, but I'll just have another couple of casts to the opposite bank before finishing the session. On the last retrieve I had a brown follow the spinner and just nudge it but wouldn't strike it. As it moved off I noticed what I thought was an old cigarette packet (light green similar to an Alpine packet) caught up on the river bottom but it looked a little long to be that. It was some four meters away and so I thought I would get it out of the river anyway. 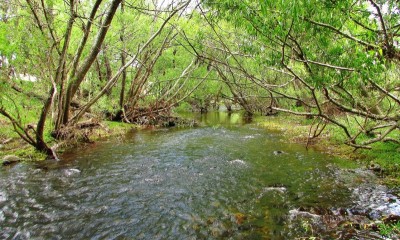 Well when I got to it I could not believe what I was looking at... it was a $100 note!! Now I'm in the middle of the Mersey River and there's not a house anywhere further upstream at all, plus I'm in a section of river that is flowing reasonably fast and has been in flood up until a few weeks ago. How long it had been sitting in this part of the river I have no idea, but I didn't mind getting wet up to my armpit retrieving it from the rocky river bottom I can tell you. It must have been there for some time though as it had a light film of slime on it, but hey that didn't bother me one bit. So that was a great finish for my two hour session on the Mersey today and like the title says ''One Rainbow Trout and One Hundred Dollars Better Off.'' and catches like this are hard to find. 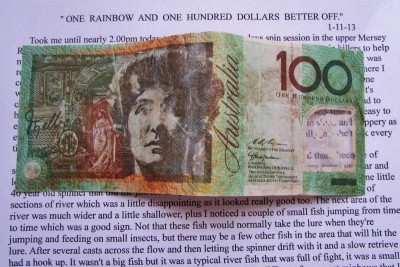 It's a little dirty, but that didn't bother me.

You must have a bit of Irish in you.
Top

I think it was more arse than class finding it too..

What a find Adrian! Definitely would have made your day for sure!
Cheers

I wish every trip to a river was like that one Lx..

I can still remember it like it was yesterday Sebb..

I've actually got another one from a few years back that I'll put on the site at a later date.. that one's ones about a lure..