After having 40mms of rain two days ago and more rain forecast for the next couple of days I headed off to one of my favourite tannin waters for a spin session. Being a little on the cool side this morning I wasn't in a rush to get there, it was 8:55am when I did finally hop in the dark tannin water. The stream was running at a perfect knee deep wading height, I felt I was in for a good spin session on the trout here today in what was perfect weather conditions. With the water being a dark tannin colour I started off with a #00 gold Aglia spinner, a colour that works well on the trout in these conditions. It took quite some time before I had a follow from a trout, twenty five minutes into the spin session a small brown took the lure and landed. With such a slow start to the spin session finding the trout isn't going to be all that easy like I thought it would be. I continued fishing my way upstream and had several solid hits but just couldn't get a hook up, the trout were playing the hit and run game with me this morning. This is something that happens when the deeper water is a dark tannin colour, the trout pick up the vibration of the spinner blade, move in on it and strike hard and fast side on. The majority of the time they miss the treble hooks, other times they're just lipped and toss the spinner in quick time. The lighter coloured shallow waters will be my best chance of catching trout today and that's where I concentrated the rest of the spin session this morning. Even though they didn't fish all that well for starters, I had quite a few trout come at the spinner before turning and moving off. Normally in the shallow runs the trout are very aggressive but for some reason they weren't today. 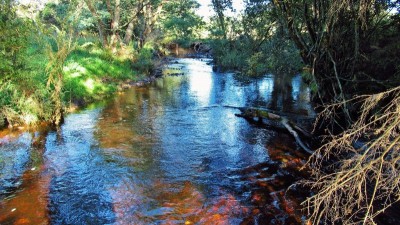 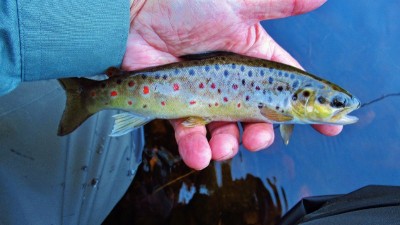 The first of the session..

It wasn't until 10:05 when I caught my second trout, this fish was taken in a small pool in the right bend of the stream, it was a solid fish and in beautiful condition. After it's release things went a little hay wire for a while when I hooked and lost a couple more trout, I had tried a few other small Mepps spinners without having a touch on them. It wasn't until I moved further on upstream and went for the #00 March Brown Bug spinner to fish a long run of shallow flowing water when I caught the third trout of the session. That trout took the Bug on the first cast into a small flat water close to the right hand side of the stream. It like the last trout caught was in top condition, this trout was caught one hour forty minutes after that second fish. The good thing about catching this trout was it took it hard and fast, it was the most aggressive hit of the morning so far. I moved on into the next shallow stretch of water when the third cast and retrieve resulted in another aggressive take, this trout was much larger than all of the trout hooked so far. It ran up and across the stream before turning and running back downstream before I managed to turn it around and ease it back upstream where I slipped the net under it. It was a beauty, the fish of the day by far, a fish that weighed 495 grams, things were looking up now and I was feeling a lot happier too. That's as far as it went though, after it's release I hooked and lost three trout in a row which was enough for me to spit the dummy, head back to the car (12:10pm) and go home to cool off. The reason I was so annoyed was the fact I needed to catch seven trout today to reach my 400th for this season. 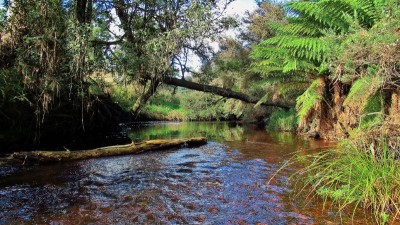 Another trout was picked up here. 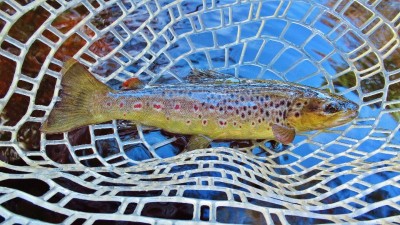 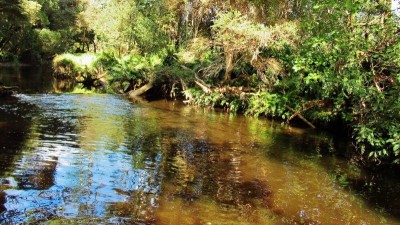 This water gave up a trout.. 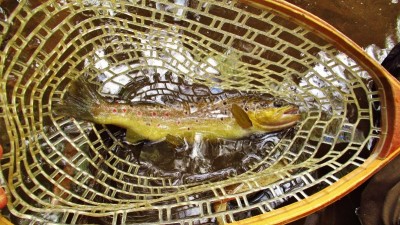 The last trout of the morning spin session.

After having some lunch I had cooled off and was back into the right mindset to head back and start off again from where I hooked and lost the last trout early on. When I arrived I noticed the weather was changing, dark rain clouds weren't all that far away and the wind had picked up, I had to get a hurry on before it arrived. I was back in the river at 2:20pm and continued from where I left off, the first cast and retrieve into the stream I had a follow from a trout. I decided to replace the March Brown with a #00 copper Aglia Mouche Noire seeing the light had faded, it was getting very dark now. It wasn't all that long when I was fishing another shallow stretch of water when a small trout darted out from under a small log in the river and had a go at the spinner, it missed taking it. I didn't mind that happening either, what it showed me was the copper coloured may well be the right choice in these changed weather conditions. Further up the stream I had another follow in a slow flowing shallow stretch of water from another small trout. It wasn't until I reached the head water of it when I flicked the spinner over a fallen log and let it drift downstream in the fast flowing tannin water when it was taken by a nice medium size brown trout. After a brief tussle with it I had the fifth trout of the second spin session in the net, a nice medium 330 gram brown, just after that I hooked and lost a couple of small browns, caught a couple of tea trees and had a line tangle when a gust of wind hit. I knew I was going to earn every trout I catch from here on. 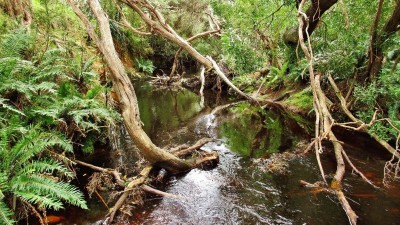 This deep pocket of water gave up a trout. 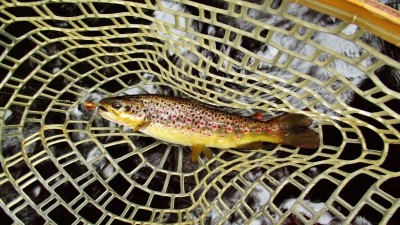 The trout taken from the deep pocket of water.

With just two more trout required the wind picked up and the rain arrived, thankfully I had some shelter from a few large gum trees as I continued to slowly fish my way upstream. My sixth trout was caught ten minutes later in a very narrow shallow stretch of water during a heavy downpour, only one more trout was needed now, I'm hoping it will be in quick time too as I'm getting a little damp. It took a while longer than I had hoped for, in fact it was thirty five minutes later when I picked up the seventh trout and my 400th of the season. To make it more enjoyable was how I caught it, after having a few short hits from this fish without it taking the spinner it wasn't until I nearly had the spinner sitting in front of me when I saw the white inside of the trout's mouth just behind the lure. What I did next was to use the little Aglia Mouche Noire like a jig, I did actually jig the spinner up and down and the trout took it. Not long after I slipped it into the net, out popped the spinner, call it lucky or whatever you want, it was good enough for me and my day was done. It was a decent size fish to end the day with as well, it went 410 gms after deducting the weight of the net from the total weight. Today I was determined to go home with my season tally sitting on the 400 mark, it may have taken two trips to this stream and longer than I would have liked, but I did it. I was glad it was over too because at the end of it I was totally worn out. 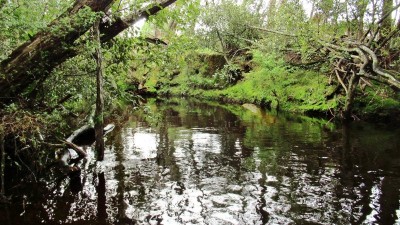 The 400th trout of the season was caught here. 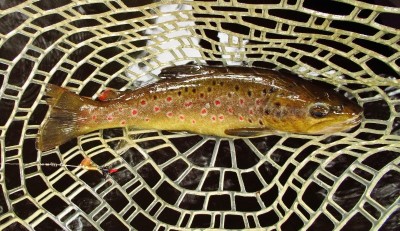 Congratulations on the 400 trout for the season!

We haven't met but from reading your reports and articles, I feel like I've known you for a long time.
The moment I read the water was dark tannin, my instinct was aglia gold 00, and your next sentence was exactly that!

Thanks Sebb, it's taken a while to reach it this season, certainly glad I've reached it.. Have added anther 26 to the tally since that day..
Yes, the little #00 gold Aglia has done a top job on the trout this season in the tannin waters.. the season closes on the 2nd May so still have time to add a few more trout yet..

Congratulations on your 400, Adrian
I'll bet you were a bit sore after that session
It made me feel better knowing that the guru also hooks trees now & then.
Cheers Gra
Top

Texas wrote: ↑
Thu Apr 08, 2021 9:41 am
Congratulations on your 400, Adrian
I'll bet you were a bit sore after that session
It made me feel better knowing that the guru also hooks trees now & then.
Cheers Gra

Thanks guys,
yes it was one of those days I hate Gra, thankfully I don't have them all that often,
those tea trees & dogwood trees don't let go of the lure either..