Very impressive on all levels. Very interesting to see the "learning curve" in the first few years, for both learning on the angling side and the learning about the rivers too.

The Mersey is my favourite river, for an un-explainable reason but it does have a soft spot for me. Sad to read how it is fairing river health wise. The other notable point of interest was that although most of the Bows were caught in the Mersey, your comment of the Bow numbers being down.

The fascinating part is those Atlantic Salmon, and brutes of fish too. How did they come about?

The Mersey River is noted as a wild brown & rainbow trout river where as most others are just wild brown trout rivers.. After talking to a friend in the IFS about the few rainbows I caught & released in it he told me that they did put a few adult rainbow trout in the Meander River a couple of years ago. So it looks like they did spawn in the river, though the survival rate with river natural spawned trout in rivers is only around 8-10%.. So it could take many years for them to become established in the Meander River, plus other fishers may not return what they catch either..
As for the Atlantic Salmon they're put in the lakes by the salmon producers (excess stock or old breeders) with the permission of the IFS.. They used to put some in Lake Barrington near Sheffield at the end of each trout season but they haven't done it for a several years now.. Most are put in Craigbourne Dam or Brushy Lagoon now days. 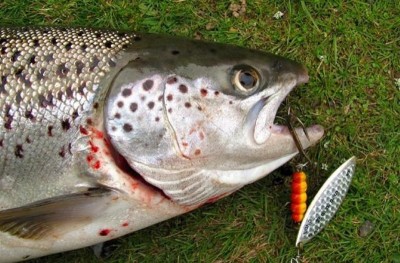 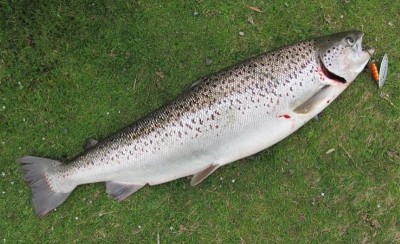