Not trying to get your “secret spot”, but is this upwards of where the creek is channelised? Do you have a good chance of them anywhere or do you look for specific features/structure?
Thanks heaps, keen to get onto a carp.
Top

I think my bike and a pair of polarised glasses are my 'secret' weapon against the war on Carp. If you go for a ride along the creek, particularly on a hot sunny day when the water is relatively clear, you can literally see hundreds of them. The creek is infested. Of course, catching them is a lot harder than spotting them!
Top

Thanks, I’ll try give it a shot, just need a pair of polarised glasses.
Top

Cornacarpio wrote: ↑
Sat Feb 01, 2020 8:10 pm
Yeah, I've been doing some 'research' of Lilydale Lake and have noted several reports that it is a tough place to fish. It's a bit disappointing, as it's a fairly large body of water and has the potential to be a really good fishery, in my opinion. Like you said, it probably needs to be a couple of meters deeper, as from what I've read it's quite shallow and acts more like a flood retarding basin than a genuine lake. It is a nice place to go though and I did enjoy riding around it.

Also ChrisD, you'll be pleased to note, even though my Carp numbers are down this summer, I'm making a concerted effort to fish other places besides Gardiner's Creek!

Cornacarpio wrote: ↑
Thu Jan 02, 2020 8:42 am
Well, the summer of 'hit and miss' fishing continues. It was a return bout at Taylors Lake and the 'A' Spot was open for business! This came with the usual set of (high) expectations. Things were off to a 'flyer' with a Carp within the first 10 minutes...this (presumably) set the scene for a productive day...only it wasn't to be. We waited and waited and waited...for hours and hours and hours on end. In fact, we didn't even get another bite. Not even the Carp were on the bite. We decided to call it quits just before dark. You could imagine my surprise when the last rod I pulled in for the night had a small Cod on it! He devoured a yabby almost as big as himself! What was also surprising is that the rod hardly moved at all and I only realised I had hooked something when he was close to shore.

It was a little disappointing today to be honest, but catching a Cod right at the end was an uplifting experience, that has probably inspired another return trip - tomorrow! It's also good to see the Cod stocking working at Taylors so well - these things were a rarity in the lake in the 1990s and early 2000s, now they're not uncommon!


Feeding habits
Murray cod are omnivorous feeders, preying mainly on other fish, crayfish and freshwater mussels, but supplementing this diet with water fowl, frogs, water rats, grubs and worms available. they are most active in summer, especially at night. during the day they tend to shelter near submerged logs and tree roots, where they often take up a position on the downstream side of the obstruction and wait for back eddies to bring food to them.

Great job! Was this taylors lake next to keilor? I never imagined there would be fish there haha
Top

Tried the creek on Thursday, but as is usually the case these days, the Carp were not interested. One by one they would sniff my bait and ignore it. 'Twas a nice day, so I hoped on the train at nearby Glen Iris station and got off at Burnley. From there I cycled to Albert Part Lake. Upon circumnavigating the lake, I saw a school of Carp darting around. Some of them were in the vicinity of 70 - 80 cms. So I promptly chucked a line in and was promptly on! I reckon I got this one within 5 minutes! 'This might be my day' I thought, but it was not to be - didn't even get another bite, but I guess that's fishing.

APL is a tough place to fish, it was even hard positioning the rod with so many joggers and walkers around. I had it right parallel to the footpath with the bail open - and it's a good thing I did - otherwise I would be going for a swim! There was a school of Carp where I was fishing, but this proved to be a double edged sword. Good because I knew they were there, but bad, because everyone that walked past my rod would stop and gawp at the Carp, which no doubt spooked them a bit. Having said that, its also not a bad time to fish APL. With all the rain we've had recently, the water level is up slightly and this means there is more water above the weeds, making it easier to fish.

Super-stoked I caught my first Carp at APL, but at the same time, a little disappointed it wasn't a 80cm+ monster is the lake is renowned for!


CC
On a side note, I did see 2010 Premiership star and 2011 Brownlow medalist Dane Swan running around the lake trying to keep some semblance of fitness up! 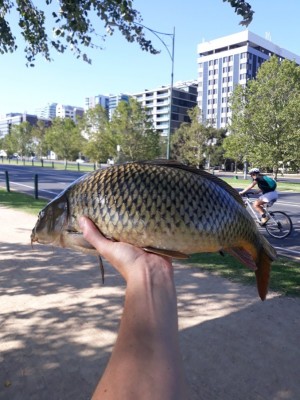 Some of the fishos I follow on social media reckon APL goes off in the wee hours of the morning (3am-5am). These blokes are mostly chasing the EP and yellas but your commentary of joggers and walkers reminded me that they probably don't suffer the inconvenience of gawping and gawking

After a hard day of work - and after checking the weather forecast - which predicted significant rain for tomorrow (today) and for the rest of the week, I decided I basically had to go fishing. My hands were tied. So, I hopped on the treadly had headed down the creek to one of my 'tried and true' spots that I have not frequented for a while. From there, the session followed a fairly typical course: chucked the rods in got, got bored after about an hour, was thinking about going home, heard the 'zing' of the reel, rod buckled over, reeled in a 'typical' 60cm Carp.

Although the Carp was nothing spectacular in terms of its longitude, the fight was anything but. I thought I had hooked a 120cm monster at one stage! As I have done many times before, I couldn't believe how 'small' the fish was when I finally saw it. I've said it before, and I'll say it again: I truly believe Carp to be the best freshwater sport-fish (on ANY gear) there is. Their fighting qualities, particularly in a narrow waterway such as Gardiners Creek, seem to give them an added zeal and tenacious fighting quality.

Side note: headed to APL on Sunday. Saw some absolute thumpers swimming about (70-80 cm) but couldn't even tempt a bite.

How Fish View Your Bait
The fish is low in the animal scale, and so has only a primitive form of intelligence. In fact, it could be argued that it has none, because intelligence is really dependent on upon reasoning power. No experiments have yet proved that any fish is capable of reasoning - it relies entirely on its instincts for the stimuli which prompts its actions. 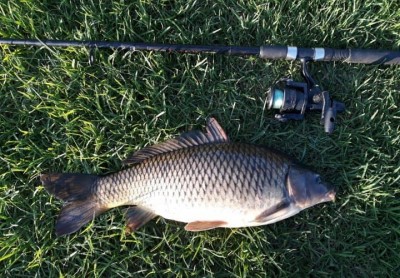 Does anyone have any tips for targeting carp in Coburg lake and the merri creek surrounding it? I live pretty close to the lake but i have never even managed to get a bite while fishing there.I have only ever seen 5 carp in the lake but i didn't have my rod. Im nearly convinced there are no fish left in there

They're in there mate, but Carp are a very underrated sportfish. You have to put in the time to catch them. I've been to Coburg Lake/Merri Creek a couple of times this summer and have only caught one eel!
Top
Post Reply
1194 posts