You’ll no doubt get a few Karen’s barking at you, but just tell them it’s for the good of humanity and keep on doing it
Top

Headed down to the creek today on the treadly only to find someone in 'my' spot! The bastard! Not to worry, it turned out to be quite fortuitous as I was 'forced' to try other spots. The first 'other' spot I tried yielded nothing after 30 mins, so it was off to try another well-known spot which eventually yielded a 75cm Carp that fell to a worm/corn combo. Not bad a for a 'lazy' Sunday afternoon! October is the month for big Carp!

I was lucky to get him in the end, as he was only lightly hooked. 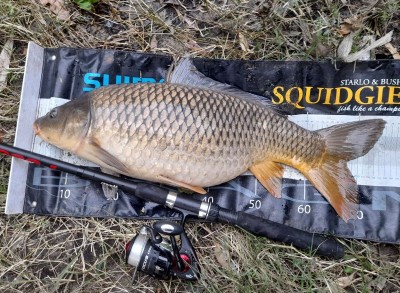 Look at the gut on it! Nice job CC. Makes me regret not hitting the carp hole this weekend.
Top

Beauty CC! What a fattie! Nice one.
Cheers

sloth wrote: ↑
Fri Oct 08, 2021 11:22 am
My “plan” so far is if it’s a creek fish I’ll do CC’s method. Lake fish I’m a bit concerned that they won’t “disappear” that quick and when the water clears up the kiddies and mommy joggers will be traumatised by the slaughter pit that appears before them …. Plan for those ones I think is to stick them in the chest freezer at home and then transfer to the bin on bin day for “just in time” disposal.

I haven’t told the wife of this plan yet though.

I wouldn't stress too much about the lakes, I've sunk a few at Albert Park and they get cleaned up pretty quick

Fisheries doing this with the stonkers everywhere.

Cant wait for the bears to move in
There is always more to learn , fish to catch , places to see and friends to make.
Top

Another powerful mid-70s model from the creek on another supreme Sunday. Foul-hooked in the anal-fin, but I'll take it! Sometimes you need just a little bit of luck! Pity I didn't have my phone on me, because it went on a couple of really powerful runs that would have made for some cracking vision! 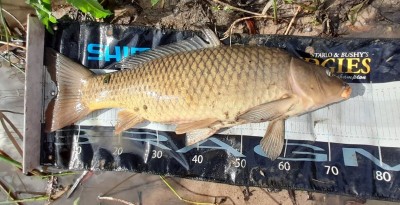 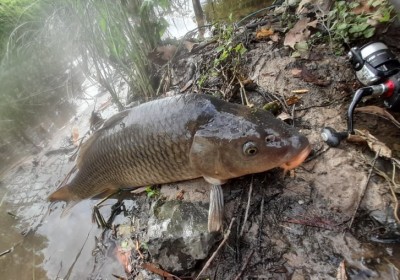 Another very nice one!
Cheers

What a topsy-turvy year 2021 has been - I've gone from being unemployed to trying to hold-down 3 jobs! I've been so busy in fact that I've barely had time to wet a line, especially in the month of December - I did head out to the Dandy Creek on Christmas Day - unsuccessfully - and the annual Father/Son fish-off at Taylor's Lake got postponed to NYE/NYD and even that was a bloody non-event - 4 rods between us and not a single fish over the course of two sessions over the best part of two days - we threw the bloody kitchen sink at them as well - corn, worms, and yabbies for bait and barely a single bite! Taylor's has fished poorly the past half-a-dozen or so times I've been there now come to think of it.

All I've managed so far this trip is a stinking old-redfin out of the blue-green algae infected town lake. Better than nothing I suppose - but only marginally!

Angling For Redfin
Many redfin critics have relented. The fish is still a menace to native fish but the menace is no greater than it was twenty years ago: nature has achieved a balance. In those marginal streams where neither trout nor native fish will live, the redfin is actually welcome. What has mellowed the critics is, no doubt, the ease at which redfin can be caught. they rarely disdain a well-presented offering, even if they have been feeding all day and, being gregarious, the capture of a single specimen can be the beginning of a fishing bonanza with the companions of the first fish crowding around to see what is going on. 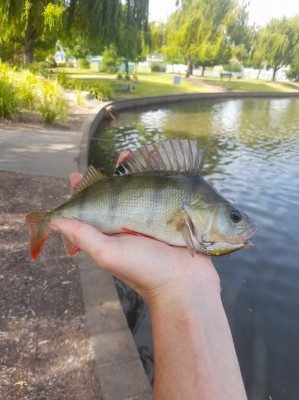 Headed out today where it all began for me - the once mighty Wimmera River. I don't know if its me getting older and looking through things with rose-coloured glasses, but I think the halcyon era of fishing the river - particularly around the back blocks of Glenorchy - is over. The water was black and stagnant and the river dry in places. The carp are still there, but don't seem to feverishly devour the bait like I remember. I haven't had a decent session there for many years now. I got 3 tiddlers today, through the technique of dapping - just literally placing the bait in the fishes mouth as I saw them swimming around in various rockpools. I could have probably caught a few more, but I had to go from pool to pool as I would spook them all as soon as I caught one. I ended up with 3 all up, which the bull ants seemed to enjoy.

I hear the Reddies are on the go at Fyans, so might have to head out there tomorrow... 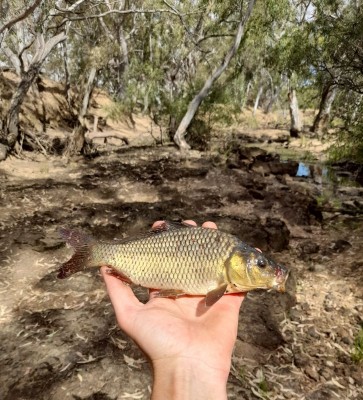 I've never heard of dapping, sounds fun. Might give it a go at some of my local metro haunts.
Top
Post Reply
1303 posts