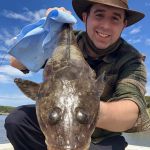 February arrived delivering us a healthy mix of strong winds and stormy downpours.
Strong winds and heavy rain pushed most species into deeper waters away from the pier resulting in mixed land-based fishing. Squid have actively returned to the pier during the strong hot north winds followed by other species. Squid continue to appear in low numbers and larger size during the evening/dusk with smaller plentiful squid during the nights.

Wednesday 29/01/2020, overcast evening with a light SE and a rising, high clarity tide.
Squid remained out from the pier, grouping in squads and hiding in the deep northern weed beds. Taking advantage of the SE winds and focusing on a high movement drifting retrieval allowed for multiple hook ups in a short span of minutes. This resulted a healthy sized mix of five squid, the largest 28cm followed by four 20cm hoods. Sitting out far some people were unable to cast the distance and the squid were not budging. The two largest became dinner/bait, the rest I gave away.


Thursday 6/02/2020, sunny afternoon/evening with a moderate S crystal clear dropping tide.
Hit the pier at 3PM with the hope of being done before the 6PM low tide. Squid remained quiet despite the crystal-clear water until a large squad pushed onto the piers weed beds. These squid went wild hitting a sinking jig on every cast before heading out away from the pier. This activity produced four squid with mid 20s hoods. Spooked squid behavior along this pier follows a trend where they continue to head further out or into the shallower protected waters. Watching people shallower have no success, allowed focusing directly into the current at the end of the pier only to be rewarded with a 35cm squid pulling drag. Three more smaller squid were caught at the end into the current and one on the shallower concrete. Kept the largest two, rest were given away.

Baiting up a homemade circle hook paternoster flasher rig using the freshly caught squid tentacles as bait and casting to my favorite sandy honey hole turned wildly successful. The bait remained untouched during the squid action and then, one solid fast bend of the rod tip. Reeling in the slack line and feeling the moving weight ruled out the plentiful banjo sharks before the line pulled towards the pier. Fighting the fish away from of the pylons and into the net, I landed this beautiful 40cm Southern Blue Spotted flathead. This ended my successful trip, calling it quits by 4:30PM. 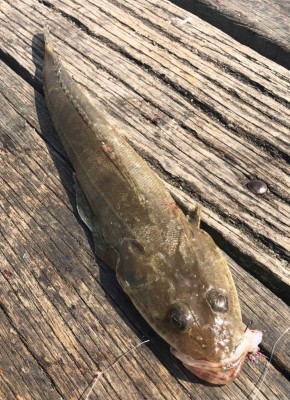 Friday 7/02/2020, overcast evening with a high clarity and moderate S winds.
Squid required motivation to get active in the overcast weather. Cracking out a favorite Yamashita 3.0 white/pearl jig paired with prawn popping the jig over the weed had the big squid locking eyes and following right to the edge of the pier. One final pop with a slow sink proved too tempting and had three 30cm squids into the esky. All three followed the jig striking over the same patch of weed three meters from the pier. Elsewhere people were not having much luck, in three hours only one other small squid was landed at the end repeating yesterdays trend. Young kid next to be did not have any luck with fish all day, happily accepted two nice sized squid.

Hoping to get out again early next week prior to my Uni graduation. Goodluck with the fishing everyone.
Top 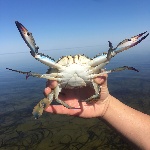 Another excellent report mate, love the squid action there. Some really solid squid and a juicey Flathead, doesn't get any better than that for the pier. Very generous of you to give your catch to the less fortunate fishos, good fish karma comming your way

thanks for sharing and I hope to bump into you when I head down that way.

Thanks Kenle!
The healthy numbers of multiple species around the pier always makes for great fishing.
I say a good day fishing is catching a feed, a great day is when everyone goes home with something.

For sure, I'm always easy to pick with my shiny fishing cart.

Top writeup; itching to soak a line but the winds are bloody feral this weekend...
Top

You are too right Fishbref, we have really had to fight to catch fish this summer between the strong winds and heavy downpours.

Thanks! It's always an exciting feeling a nice fight and seeing an attractive silhouette appear when reeling in.
Top
Post Reply
7 posts • Page 1 of 1