So mostly quiet still on the Board so thought Id post this short report from Mcloughlins Beach yesterday. Breezy day and a bit cold at 15 or so for shorts but a good day out. Tried a few spots for an early flatty with no joy other than this large Ray, (returned) and roamed the entrance for a sambo on an outgoing tide - but no luck. So and, as Id promised someone a few fish (salmon) yet to be caught, (normally the kiss of death on the fishing) we anchored up expectantly in the same arm as per the last visit. And bugger me, tight lines on the first cast on Sp. All up, over a couple of hours, about a dozen salmon between us - biggest about 50cm ish around 1kg or so (lucky day for he/ she, as it was returned - offsider came over all compassionate like and we had enough in the net already). So all good - verbal contract/promise met! Sport dwindled as the ride slackened so the next few hours involved a few more moves - for nowt. Returned to the original arm for the first hour of the runout and caught multiple small flatties and a few keeper mullet all on bait. 2pm and time was up so left em biting for next week....
Have heard reports of KGW being caught at the Lakes Entrance footbridge - so may give that a go over the next few days as about 150km and $40 of gas nearer
Tight Lines
Pirkz 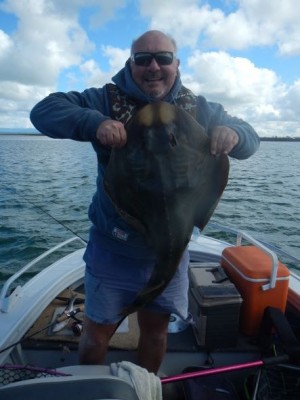 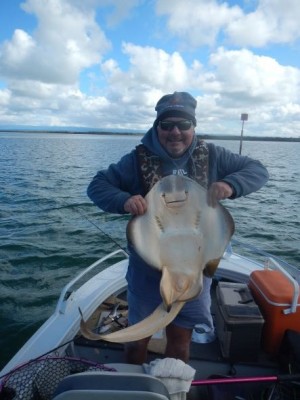 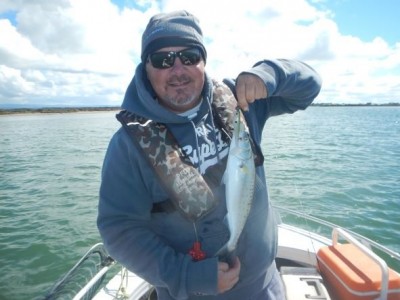 With predicted bad weather forecast for later in the week (like today onwards for example) decided to head down to MCL with my offsider and his boat once more on Tuesday. Met by calm conditions and a blue sky. Target was flathead for the table and anything else that came along of course. Tide was still running out with a bit of weed about. Very few trailers parked up, guessed most were probably offshore looking at the number of rollers on them. Fished a known summer Flathead spot in 3m not far from the ramp and were soon into fish on any bait dropped down. Mostly small stuff but multiple species including a KGW of 35 and a mullet a tad bigger (keepers). But no flathead today, and as quick as the bite started it stopped so we headed over to Mann's Beach channel and anchored up close to the trees on the left there in 5 m and berlied up in a slackening tidal run. A few more species came aboard, all on bait, nothing on SP though. One solid hook up kept me amused and wondering WTF for about 10 mins before we parted company (end rig tackle failure on my part - added a short snood to a commercial 2 hook whiting rig as the bottom one had been snagged and this didn't hold up under pressure despite 8lb line). Dont think it was a Raymond - but will never know . Tide turned and the current picked up, fish kept coming, but all small stuff, including some Pinky snapper - maybe just size, leatherjacket and a few of the usual suspects - no keepers (chicken for T?) After a couple of hours light sport we decided to move once more and stop for an hour on the way back to the ramp. Stopped for 5 mins ( which turned into the hour) en route to another mark (at random) in 3m over a clean sandy bottom which looked Flatheady. Fished blue bait and pilly halves on the bottom and finally caught a few bigger fish - always nice to catch from a new spot. First up a flatty at 50 cm followed by several others just undersize. Last few casts saw a 60 cm flatty and the large Raymond pictured come up. Both released as we thought that 55cm was the limit for keeping flathead for some reason (I now know Dusky's only ) My wife still hasnt forgiven me.... But we know where it lives and will revisit when this bloody rain stops! Noted a boat come in from offshore and proceed to beach for a bit before anchoring up in a channel near us. Met up at the ramp to find out that they had 'smashed' the Snapper offshore and had then caught about 30 KGW uptide from us using pumped yabby! Always good to get intel on the ramp and whilst we are not offshore ready / capable, a new bait pump will be on the Christmas list and should enhance our next MCL adventure. But, after nearly 600 days this side of the international border, Im finally off to see mum in UK next week, so wont be posting for a bit - hope to get back Downunder before summer departs.
Tight Lines
Pirkz 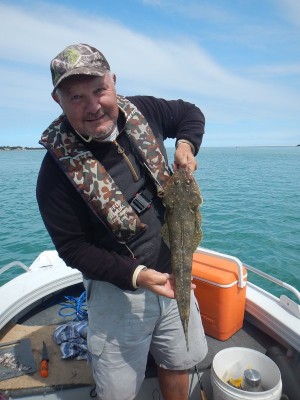 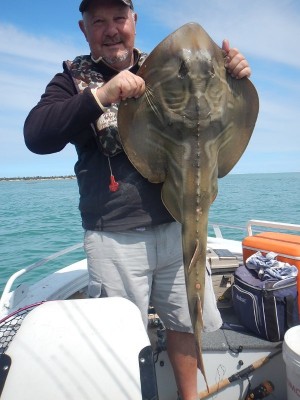 Nice work mate. I am leaving it a bit longer before I go back to the UK to visit my sister's
Top

McLoughlins Beach- A game of 2 halves

Balmy conditions forecast for Mon last so MCL it was with my trusty offsider and his ordinarily reliable Bluefin Mangrove Jack boat. Piscatorial foreplay complete i.e meet up and pie in Sale and a bit of 'bird watching', we expedited down to the MCL ramp on what was to be a glorious day. On arrival noticed plenty of trailers parked up and looking at the number of wheels on most of em no doubt most of their owners were off shore on such a calm day. But not for us, a few flathead for T from the sandier parts and the odd secret hole would do us just fine. And if said Offsider gets to use his fly rod then it will have been a very good day indeed. So checks complete, I mooched about the jetty, while the trailer was parked up, and had a chat to an inbound arrival complete with his dog . They had been offshore in his 3.9m tinny that morning and he had, for the first time ever, ( at sea that is) seen his breakfast and previous nights dinner for the second time that morning due to a 3m swell...dog was fine by the way. But as an offshore worker (rig mechanic) he was more than comfortable in those conditions and had caught some nice flatties and had released an estimated 30kg gummy on account of it being pregnant and too big to haul aboard anyway so - good on him for that. Little did I know at this stage of proceedings that he was about to become our new Best Friend (NBF) .So trailer parked up and all aboard expectantly for what was surely going to be a cracker of a day afloat. Engine started first turn of the key (so far so good) and then the bad news... Err cant seem to turn the wheel!! FFS! Having warned my mate (though the friendship at that point was being severely tested and he was fast losing favour), more than once over the years to ensure that he oiled the steering arm attached to the motor, it was a little disappointing (to say the least) that he had ignored said advice and we were now about to pay the price - as the arm had completely seized. I had had this problem a few years back on my old Quintrex tinny and had to cough up nearly $300 to get it released. So, resigned to an early mark (and grass cutting duties on return home) and chicken for T, we swiftly reloaded the trailer and dragged the boat out, on account of the Offshore mob arriving back (which included some very nice boats .. twin 225s anyone ?? That ll do nicely Sir! ) Anyway I digress. Luckily for us, seeing our predicament, our NBF being a mechanic an all ,came to our rescue and after an hour of pulling, pushing, shoving, (same thing right?) and not so subtle use of a borrowed hammer (someone else's gummy stick!) and copious amounts of 2 stroke oil to lube , the bloody thing was freed, $300 was saved, and we were once again able to get afloat. And, although the 10am window had become closer to a 12PM departure, we did catch T - managing 5 flatties all up 40 -48 cm all on bait during the 2.5 hrs afloat. So a pretty quiet day overall ( for us at least) and more action with a hammer than a flyrod, but, after the early...Err hiccup,(read f*ckup...Im being polite here) I was / we were just pleased to get a bit of fishing in. So moral of the story is - even if you get your boat serviced by a dealer annually - as he does - always listen to a mate and at least check some of the basics e.g. the friggin steering! Just to add - others did a bit better inshore than us, and heavy SPs 4-6inch ish paddletails did the business for at least one couple who looked to have closer to a dozen decent flathead keepers all taken in the shallows (1.5-3m) from what looked like a 2m camouflaged bath tub with the worlds smallest engine on the back. Obviously size doesnt always matter - just depends on what your chasing and not necessarily on how deep your pockets are. No pics today as you all know what a Flathead looks like by now!
Tight Lines
Pirkz
Top

Thanks for posting the info about mcloughlins beach (varied dates and times).

Your posts have persuaded me to consider a one day fishing trip to this part of the world tomorrow. Never been there, so don't expect too much fish catching.

I was wondering if someone can give me some help on the following;

1. If i was so lucky to catch a fish, where are the fish cleaning tables in the area (see below re area that i am contemplating)

2. Best place to have a meal in the area (dinner)

3. Is there any squid around now - should i bring a squid jig

I am a land based fisho. Thoughts on where i should try (ranked) based on current conditions, appropriate tide (eg: high or low tide) and fishing methods would be appreciated

Thanks in advance for your help
Top

Hi cant help much as always boat based. That said you can walk across to the beach at MCL and hike a coupla km to the entrance to the right. Sps and bait may winkle a few out of the snags up there. Flood tide from 10 am ish I think. Port Albert pier may be a better bet and fish n chip shop is there. Some food avble in Woodside servo. Cleaning table at MCL boat ramp which will be chocka tomorrow..Havent fished anywhere else down that way.
Note squid possible off Port Welshpool long jetty
Tight Lines and beware hungry march flies in MCL!
Pirkz
Top
Post Reply
16 posts