Not wishing to hog the board but In the absence of any Gippsland related posts thought Id put this up for those only able to fish vicariously today.
Met up with the Usual Suspect yesterday - my fishing offsider G and made the long 140km trek down to McLoughlin's Beach for an estuary session afloat and the day went something like this:
Late 9am start - met up at our midpoint rendezvous in Sale. I got the pies in (as is our custom when the other provides the boat - a Blue Fin Sidewinder series today). Pies consumed sitting by the lake watching the wildlife go by

whilst generally talking up the expectations for the day. My gear and 2 rods transferred to his truck to join his 7 - each of which was rigged differently to cover fly, lure, bait ( paternoster & flowing trace rigs) and whilst it is a bit OTT its an effective way to change styles quickly (and support the local economy / tackle shops)- whilst I generally have to fumble about in my tacklebox for at least 10 wasted fishing minutes each time. On arrival it wasn't so busy with only about a dozen trailers parked up. No Q or dramas on the ramp (which is not always a given for us) and we were on the water by about 1030- a couple of hours before high tide. Water clarity was quite good but there was some weed about (especially later on the ebb). Target species? Anything with gills ! But flathead were the main topic of conversation earlier ( amongst other things e.g. the wildlife) so that's what we were hoping / expecting /planning for. A short 10 mins motor out (no safari to Manns Beach needed) saw us quickly anchored up in a channel between submerged sand flats in about 3.5 metres. Berley in & 1/2 pilchards away, (hard on the bottom), soon saw a couple of flathead hit the deck. Both keepers around 40cm. Over the next 30 mins or so a few more came up to join our table for dinner before word got out down below decks that the pilchard was 'off' and all went quiet . So it was time for a move. Staying in the same channel we relocated to the next spot (similar depth) about 100m away and repeated the process- (adding a bit of SP action) with pretty much similar results (mainly on bait though) along with a few undersize flatties and some puffers! 4 such moves throughout the day using a variety of tactics (me utilising both rods - G only 4/7 !) saw 13 legal size flathead landed (9 kept) a small Banjo Shark (returned) and a couple of bonus / surprise (but very welcome) 28cm whiting on the runout, caught midwater on a paternoster rig set up for flathead (largish hooks) on squid. A few escapees declined to come aboard once they saw the boat , including my one solitary take on a SP. As the day progressed the pretty stiff breeze (generally the status quo at McLoughlins) went from fresh to moderate to bloody windy (as forecast ) and by 3pm it was time to hit the ramp, drown a single cold beer (supplied by the boat owner- another of our customs) and head for home, where I would process the catch for both of us using my recently acquired Marttini filleting knife (thanks Santa) and hand over a share of the spoils / frozen fillets on the next meetup (this saves messing about at the ramp cleaning table and allows us an extra 30 mins afloat and still meet an ETA back home ). Overall another successful, albeit fairly short, session out on the water, which surpassed expectations and as always provided more than just entertainment: i.e. a pie, a beer, mateship, banter, and a fish or two .. what better way to spend the day (that's rhetorical by the way as most fisho's already know the answer ). 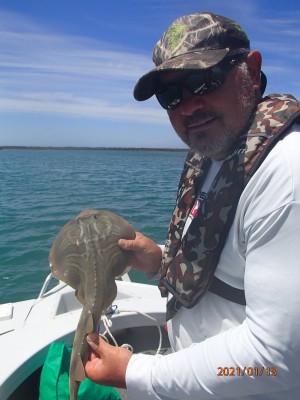 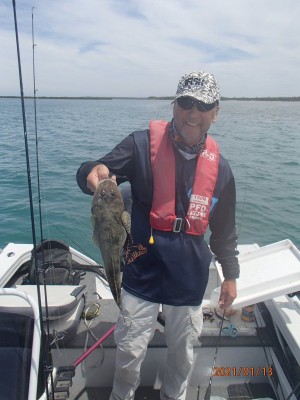 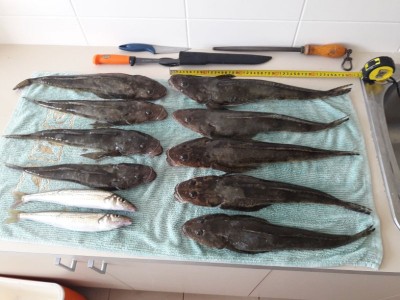 So fearing another lockdown I decided to venture out (well) beyond the 5km limit and travelled down to Mcloughlins Beach yesterday with my fishing offsider and his boat. Lazy start as usual, arriving around 10am, as its a bit of a drive from Paynesville, and early mornings no longer agree with the family as they wake the dog up! Met by a high tide, clean water and only a few trailers in the car park. Todays target - salmon (bait) or salmon (SP), salmon (fly). Drifted the main channel using SPs for nowt so engaged plan B and motored off to Manns Beach. Couple of boats there doing the salmon trolling thing, and one reported a 20 plus catch earlier in the day ... looking good...though they'd recently gone off the bite - coincidentally as soon as we appeared on the scene - looking not so good. Still expectation ( albeit brief), mateship & banter and a sunny day on the water are rewards in themselves - fish (for us at least) are always a bonus ! So after a quick drift - for nowt, we decided that if we couldnt find their address we would invite them to ours (via a berley mail trail) , and anchored up close to a rather snaggy shoreline in about 5 metres. Bit of bluebait / catfood berley, cup of tea and a few biccies (whilst our hands were still relatively clean -read slime free), and it was then down to the serious business of catching a feed or two. Much to our surprise within a few minutes we had our first dinner guest - a 1KG ish salmon on a SP paddle tail (100 mm green n yellow), quickly followed by its twin on a bluebaited jighead .Things were looking promising (unlike our last trip a month or so back when a flat boat battery resulted in a return home without even wetting a line). 3 hrs later and with only a short move required to avoid a tackle hungry snag, we ended up with about 20 salmon all around the 1kg mark give or take, 4 leatherjackets, and a wrasse of sorts. All methods caught , though only 1 salmon came to the fly (during one of the more frenetic periods). Bait outfished SP 60/40 - as long as it was hard on the bottom. All in all a very good day - for us and the salmon, who were ultimately spared the knife. Whilst I had intended to take some home and try a few U tube recipes ,when time was called we had a bunch of em (14 or so) still swimming around in the keep net. A few had escaped (during the move) and a few others had been returned earlier. But with no esky or ice, a need to bleed the fish and a 2 hr journey home from lines up, I realised that they wouldn't be at their best, and without a cat at home, decided to release the lot of em until our next encounter.
So chicken for T once again...
So if salmon are your thing it my be worth a trip down that way at the moment
Tight Lines
Pirkz

PS Lesson of the day - dont put live leather jacket in a small mesh keep net, as their dorsal spine snags the net and is an absolute xxxt to get out resulting in a tear to the net, unless you have the patience of a Saint - which I dont! 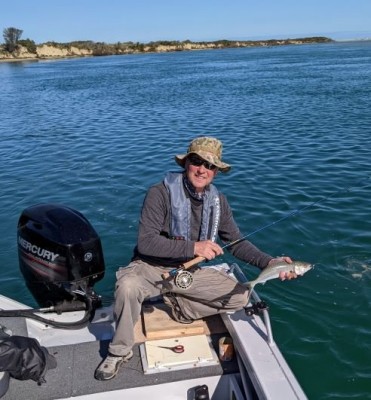 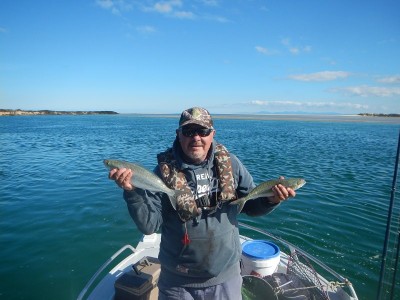 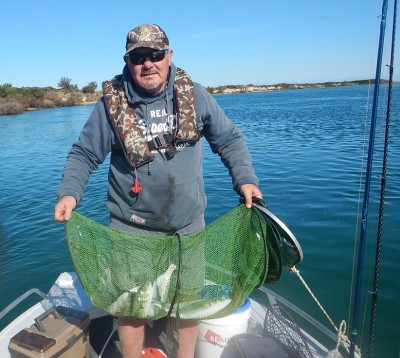 Half your luck mate, sounds like a good day on the water. Enjoy it while you can.
Top

Pettmans Beach has been fishing well for salmon this last week. The only obstacle to catching them was the howling winds which made casting virtually impossible.

A little further east has some massive shoals of salmon working between Point Ricardo and Cape Conran. To find them, just look for the gannets. Flocks of them are following the schools and diving into them like like Stuka fighters on steroids.

Would love to, pity about lockdown. If it lifts, I will most certainly take a drive
Top

Left Paynesville in the rain yesterday morning and headed down to fish out of McLoughlin's at Mann's beach as the forecast was dry and light winds. Target was salmon - mainly for sport, and had a good day over the 4 hrs we fished. Probably 40 fish between the 2 of us mostly on SP paddletails. Biggest was the first of the day at around 50 cm and the rest were mostly around the 40 -45 mark. Most returned incl the big fella (for us at least). Only 4 kept. Beautiful day only one other boat out near us - also catching. 4 other boats scattered around the various channels not sure what they caught. Also got a trevally and some small flathead on bait on the way back to the ramp. Would have gone back down today but the missus doesnt like salmon and I am indifferent, so will save the $50 spent on gas and the $15 spent on 2 x $7.50 breakfast focaccias from Sale bakery (very nice by the way) and wait a while for the flathead to wake up down there. That said a tight line and good sport are addictive - so tomorrow may yet tempt! Watch this space. 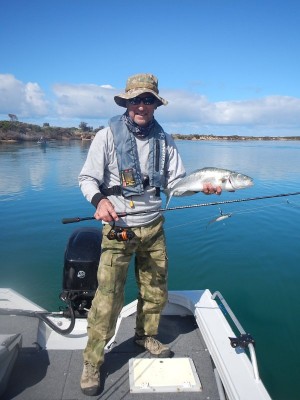