I managed to get down for a squid session yesterday on the peninsula. Wind was annoying but wasn't too much of a problem. Fished from 4pm - 10pm. 15 minutes in and snagged a huge puffer on a yamashita. Tried squid on a running sinker for leatheries, but was pretty quiet, got a wrasse; went back to jigs. An hour after had two squid take my jigs a few metres away from the pier, was incredible to watch. Got them on a yamashita and a gancraft. Another couple hours go by and the same thing happens, two slightly bigger ones hit my jig close to the pier. Both on a gancraft 3.5 with gold foil. Got a 23 cm hood later at about 8:45. Casted glow jigs and red foils consistently, and covered ground until 10:00, but didn't get anything, so headed home 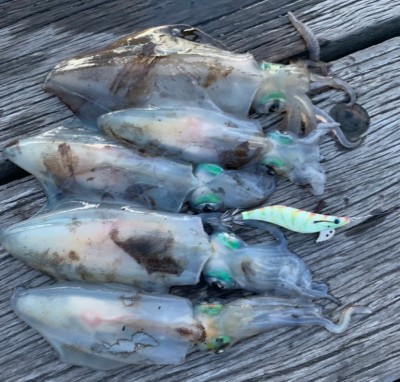 Nice catch, are they around the average size you get at mornington or are they bigger/smaller?
Top

All of them Green eyes. nice!!!!
Small Fish Specialist