Warmer weather fires up the trout

Warmer weather fires up the trout

Warmer weather fires up the trout.

It's been a week since my last fishing session due to a trip to the hospital & today I was finally well enough to head off in the hunt for some wild brown trout. The weather was sitting on 17 degrees when I arrived at my destination, once in the water I knew that I would get a few trout seeing as the water temp was touching seven degrees. The water level was down by around three inches since my last visit but it still had enough depth & flow for a spin session. The Okuma Finesse ULS 6' 1-3kg trout rod couple with the Helios SX20 reel was already set up with the small Mepps #00 gold Aglia spinner and that's what I started the session with. The first stretch of water I fished was one that always looks like it should hold a trout but like always it didn't, I'm sure one day it will surprise me. Neither did the following wide shallow run but the following stretch of medium flowing water did where I had a follow from a small half interested brown trout and that's as far as it went. I immediately went for a change of lure, it was a #0 Aglia Fluo brown trout that I went for. With the water temp sitting on seven degrees I thought the duller blade colour would be better suited to the conditions. 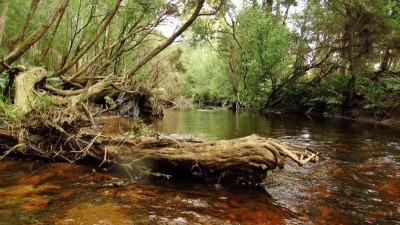 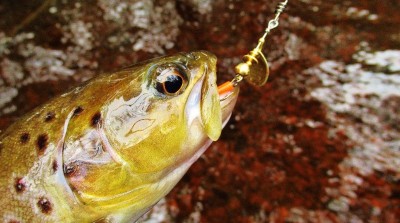 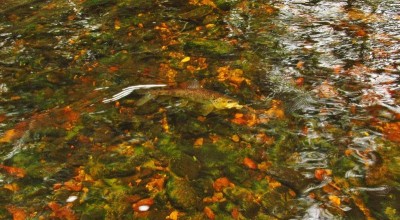 The change of lure worked, the following stretch of water saw the first trout of the session caught, a small brown that was full of aggression. After that it became a little frustrating, the trout were there and all very aggressive, only problem was I hooked and lost three in a row. It was still good to see the trout were out and about and eager to attack the Aglia Fluo spinner. After hooking & losing three in a row I was seriously
thinking about going to a small hard body but decided to stick with the Aglia Fluo a little longer. There were plenty of good stretches of water ahead of me that would be holding trout, it was only a matter of time before one was landed. It was only five minutes later when I had the second trout well and truly hooked, a nice solid brown it was too. After a good tussle with this young male brown I had it in the net, that trout went 410 grams and was in top condition. It was taken close to the right hand river bank in a narrow stretch of fast flowing water. A few minutes later fishing a wide shallow run I was onto my third trout of the afternoon, this trout was a bigger fish than the last one. A long cast up & close to the right hand side of the river and a medium retrieve to keep the spinner at the same speed as the water sucked that trout right in. That cast & retrieve being close to the river bank drew the trout out from a under cut in the river bank and it didn't hesitate to take the Aglia Fluo spinner. It like the previous trout was beautifully coloured well conditioned trout that went 460 grams. 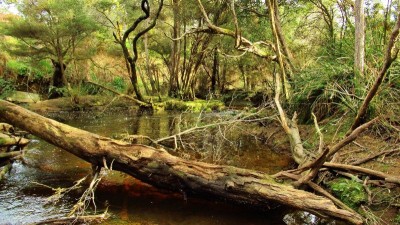 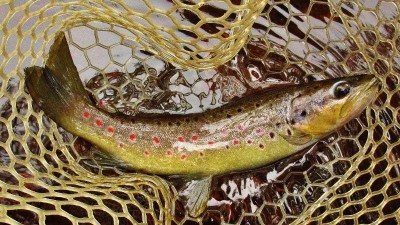 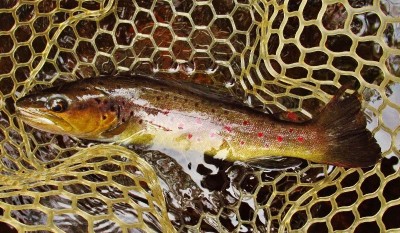 Two casts later to the top end of the same stretch of water trout number four took the spinner, this fish wasn't as big as the previous one but it was still a decent size trout. So after losing three trout in a row I now had caught & released four in a row, it's funny how quickly it can tun around in one's favour. From here on the trout were being caught on a regular basis, around 8-10 minutes apart and before I knew it I had caught nine in a row taking my catch into double figures for only the third time this season. The going wasn't all that easy the further I went up this tannin stream, logs jams were becoming more frequent and getting over them wasn't what I needed to be doing. With the trout all being good size solid fish it was well worth the effort I was putting in & that's why I stuck to it. The thought of the change of lure I had early on had gone right out the door, I was quite happy with the results the Aglia Fluo had produced. I decided I would push on a little further to see if I could crack the dozen mark with my catch which would better my best seasons catch of eleven trout. I caught trout number eleven in reasonably quick time and was feeling quite confident the the twelfth & even the thirteenth trout was in the bag. I fished well on eighty meters of river for just the one follow after the release of the eleventh fish, trout number twelve wasn't looking all that good now. It was 4:20pm when I decided to fished one more shallow piece of water before calling it a day. The very first cast to the top end of the medium/fast runs I hooked my twelfth trout only to see it toss the spinner on it's second leap from the water. My day was done and I had finished it with the loss of a fish, not how I had wanted the spin session to end at all. Over all it was still a top two and a half hours fishing the tannin waters, even better was the size of the trout caught in it. Trout of this size was quite common many years ago, hopefully they're here to stay. 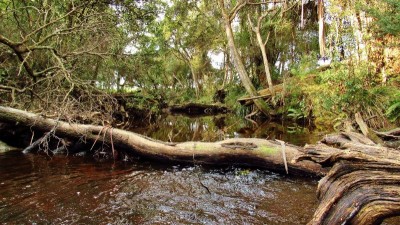 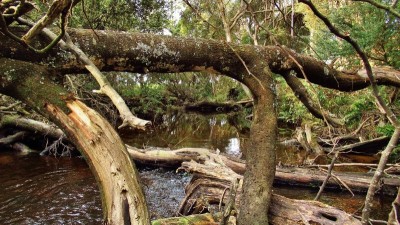 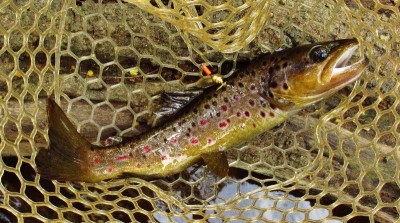 Top report with some really nice pics as always Adrian!
That’s still an awesome session catching 11 nice fish in 2 and a half hours of fishing!
I’d be very happy with a catch like that any day of the week

Enjoyed the read very much.
Cheers

Great to see you out and about Adrian, after your Hospital Pitstop to get the body sorted.

That first stretch, what can I say, hope it does surprise you one day with a trout. But like any Pole-position, it's not the start but the result at the Checkered Flag

that counts. And equalling the record for the season, is a Podium finish.

I can imagine Pam in your mind (as I was also) waving the yellow cation flag as you navigated those log-jams, glad you overtook them safely.

I made sure to get this report on before the Great Race started Bill...

Pam saw one of the photos of a log jam I clamber over and just rolled here eyes back & shook her head..

As I've said before Adrian I love your work, well done, cheers davo