G'day fellas, been a long while since my last post as I wasn't able to get out and do much fishing for some time due to an injury messing up my last season and general CBA's after that. Managed a few trips over the last 12 months including the reel it in flatty comp in Mallacoota (far more drinking than fishing) in which we did terribly, a week chasing bream in the oyster leases in Forster, NSW on plastics (tough fishing with a few excitements and lots of lost jigheads) and a good session chasing big duskies in Crescent head,NSW on artificials which produced a few good fish but no photos (so it didn't happen right).

Anywho, I did head out with a couple of mates yesterday to see if we could track down a red.

Launched late around 11am and picked up 2 squid near Reef island in over an hour trying, they were hard going with a few followers that couldn't be tempted. Headed up past Corinella in glassy conditions and sat on a mark I have from a few seasons ago which produced well back then. Snuck in the tide change and fished the ebb till around 4pm. Managed one fish at just under 70cm and about 4.5kg. No stonker but it rates and my mate that reeled him in was stoked to get onto his first real snapper. There was an absence of Sh!tfish around with this literally being the only fish caught on that mark. The bite was very soft, like the fish just sat there and chewed the bait, I doubted it was a snapper till after the strike and the runs and head shakes started. Bait was the head half of a pilli on a single hook, no touches on fresh squid rings. We were in 10m of water at the high tide. Bite time was about 30 mins-1 hour after the high slack water. Beautiful day on the water. I'll post a photo if my mate doesn't mind his mug going up on the interwebs.
Top
Remove these ads.

Thanks for the detailed report...much appreciated
Top 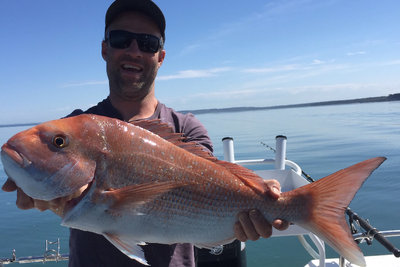 Had a very similar day. Sounded up snapper but couldn't get the pesky ***** to bite on squid rings. The bites very much looked like soft gummy bites rather than the usual snapper bite. That's early season for ya

Good to know you had a fun day on glassed out conditions too!
Top

Well done mate! I was also out off Corinella that evening. Fished around Elizabeth Island for just two salmon. Seemed like there were a lot of salmon around on the sounder. No one else seemed to do any good. Water temp was 16 deg. It just needs to rise a tad and things will fire! Cracker of an evening to be on water!
Top
Remove these ads.

Return to “Warneet To San Remo”