Headed to Cato Lake today in the township of Stawell for a quick flick. Tied on a lure and did a quick lap of the lake (as I have been doing for most days this week), not really sure of the target species in mind - a suicidal Redfin I suppose. As I nearly completed a lap of the lake I saw a huge fish - a Carp - probably 15lb in the old scale and 70cm+ in the new. I raced home on foot to grab a can of corn and the 'carp rods'. Headed back down with motor vehicle and landing net, brag mat, etc in tow. Naturally, the fish I saw had disappeared, but I was semi-confident of getting at least one. About 50mins - 60mins in I saw a Carp appear - a bit smaller than the one I sighted before, fairly close to shore, so I chucked my float at it. I saw my float 'take-off', but when I lifted the rod, nothing was there. I got a few more nibbles, but couldn't manage to hook anything.

Eventually my rod with a couple of split-shot and a hook 'went'. As I picked it up, I thought 'this must be a small Carp'. It wasn't until it came closer I realised it was a (stocked) Rainbow Trout! A nice little by-catch and my first Trout in God knows how long. Unfortunately he didn't last too long in the heat out of the water while I was taking pics, so I gutted it straight away and took it home.

I came back determined to catch a Carp, but didn't even get a bite during my third session - maybe it was too hot - even for the Carp.

All in all, I was pretty pleased to catch a Trout, even if it was a stocked-version in a family friendly fishing lake. When I was a kid, I often thought of Trout as being a 'cold-weather' fish, but nearly all the Trout I've caught have been in the height of summer! Its even got me wondering if the same spots and techniques I used out at Lake Bellfield nearly 10 years ago when I was in a 'Trout catching' phase still work all these years later. I even managed to 'bag-out' a few times out there. Also, it seems the Trout in Cato have 'grown'. I remember one school holidays when they stocked it, kids were catching Rainbows about half the size of my one, maybe this one is an 'old stocking'. I am a bit surprised they do survive in there, as the Lake seems quite shallow and devoid of any structure. Can't imagine it would be too pleasant for them on a day like today.

There's also a bit of irony in today's catch in the sense that I've just come from 'high-country' which is considered the pinnacle of Trout fishing in Victoria, to one of the driest parts of the state...

Rainbow trout are spectacular aerialists when hooked, often leaping several timesin an attempt to throw the lure or fly. In fast flowing rivers a large specimen can be difficult to subdue on light tackle. 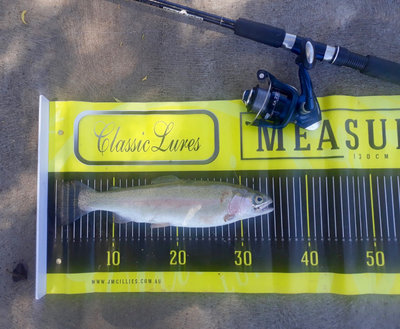 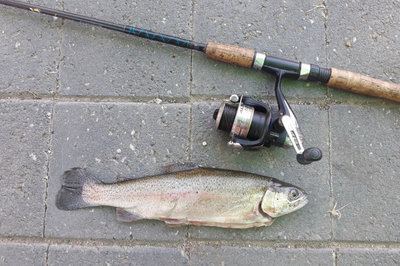 Headed out to Taylor's Lake today for a bit of a fish. Unlike the other day when I headed out there, I was 'on' from the get-go, getting bites straight away. My second bite rang the bells loud, and my rod buckled over with great force. The commotion made a boat, who was out in the 'middle' of the arm of the lake, turn their motor on on head for my 'swim'. As they approached the bank they yelled excitedly 'What ya catch? What ya catch?'. I showed them my Carp - all of about 30cm, with the hook still in its mouth. They couldn't believe how small it was. "We heard the bells and saw your rod and thought you had a Cod on". After a brief conversation, where I told them I only brought a can of corn and was targeting Carp, they kind of looked at me weird and motored off...

Another interesting thing that happened when I was reeling in a Carp and my second rod 'went'. 'F*ck' I was thinking to myself, as I tried to get my current fish on as quickly as possible. I almost got it to the bank before the hook pulled. I did, however, manage to land the second fish, on my second rod. Shortly after, a person came over to see what I was catching as my bells were ringing with regular monotony. Again, he seemed slightly disappointed it was only Carp, but seemed quite accepting of my peculiar ways.

Catch of the day was a 57cm Mirror Carp. I was using a paternoster rig on one rod, and running sinker on the other. I got most of the fish on the paternoster, and a little bit unusually, on the 'top' hook!

While not a massive haul, it was pleasing to catch a fairly decent bag. I got 11 and probably lost just as many - because of poor angling and good old fashioned bad luck! Sharp hooks definitely make a difference! I find they have to be replaced after getting 'snagged'. I think I missed a few 'thumpers', but with Carp it is a little hard to tell until you see them, as even the little ones can put up a very decent fight!

An ‘angler’ is defined as one who practices the art of fishing for sport or recreation by either the skillful use of rod, reel and baited hook or lure. The root of the word ‘angle’ comes from the ancient Sanskrit word anka, meaning bend, or hook, and even today in many parts of the world hooks are still called angels. 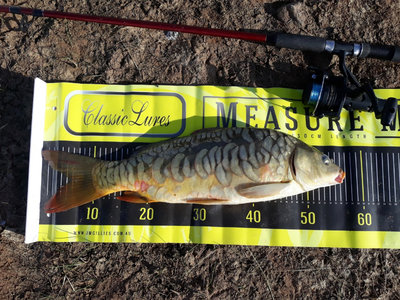 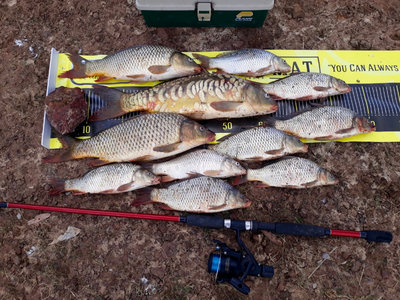 I'm back in the urban jungle, so I hopped on my bike and gave the creek a go. Great day, 30-odd degrees, the Carp were out, but unwilling to co-operate. I tried my usual haunts, had a tentative nibble or two, but the Carp didn't seem particularly interested in my offerings. I thought I was due for a change in scenery, so decided to access a 'new' spot. I ride past this spot all the time, but the steep banks makes access difficult. Today I was up for a bit of an adventure, so I traversed the steep banks. I got a bite fairly early on, which encouraged me to stay a bit longer. Eventually my float went under and I managed to land a nice little 55cm Carp. It's always good when a new spot pays off! Think I might be giving this hole a bit more of a crack in the next week or two!

In reality the majority of people who go fishing are ‘danglers’ rather than anglers, their methods only superficially resembling the skills required of the true angler. The dangler is often content to sit for hours with his line in the water, his tackle and bait and rig totally inappropriate for the spot being fished. Naturally, he does not catch many fish, but this does not spoil his pleasure. He attributes his failure to catch fish to their absence rather than his own ignorance of basic angling principles. 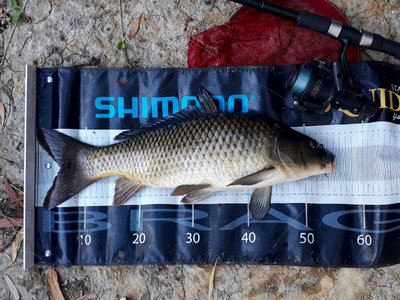 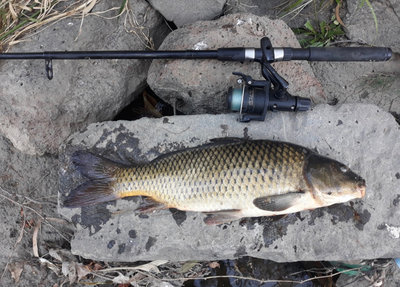 Headed down to the creek last weekend (both days) when it was quite hot. Tried some VERY fishy looking spots that I haven't tried before, but ultimately didn't do any good. I blame my lack of success on the 'black water' down at the creek which always makes fishing difficult. I had one bite for the whole weekend and I missed it!

Didn't head out again until today, where I hit up a local pond which isn't affected by weather conditions (such as rain) as much the creek. As is usually the case in this particular spot, the micro carp were on the chew, often coming on the bite in 'waves'. Oftentimes, both rods (float on one and split shot on the other) would go at once. They were only small, but all were tenacious fighters, many of them leaping in the air and trying to spit the hook. Their lack of size didn't stop me at all from enjoying the sport they provide. Excellent way to kill a few hours after work.

The most serious delusion of the dangler is the assumption that fish are anxious to commit suicide on his hook. If this were true, bait would not be necessary. The purpose of bait is to attract fish to the hook by offering a tasty morsel. It follows that the more attractive the bait the greater the chances of hooking a fish. 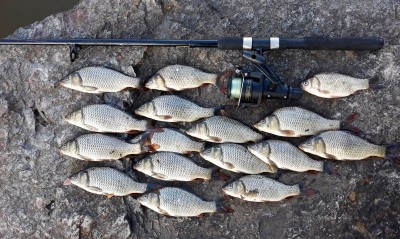 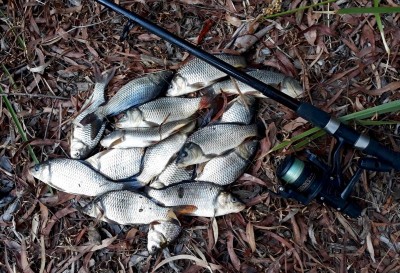 Headed back to the pond yesterday. Unfortunately, by bread was really old and mouldy and I had trouble keeping it on the hook, even after 'doughing' it up. The first one I got I saw a puff of mud near the bank, dropped the bait right into its gob, the bread was hardly in the water. The rest were all tiddlers (including a tiny mirror). Spent more time feeding the fish than what I did catching them, which was a bit frustrating, but it was still good to get out though. 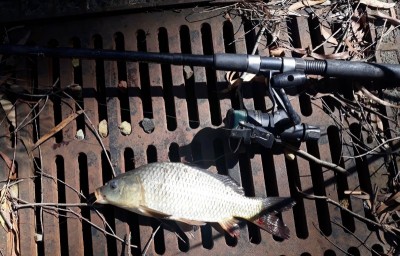 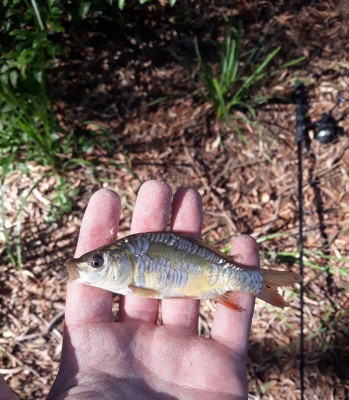 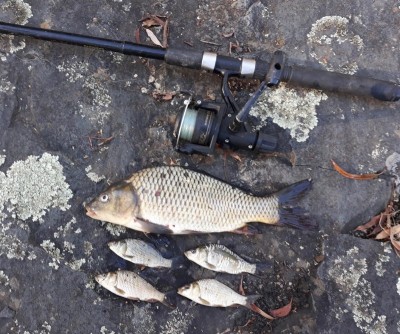