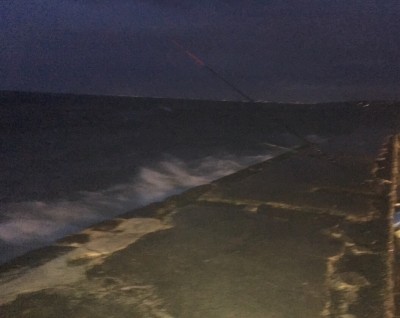 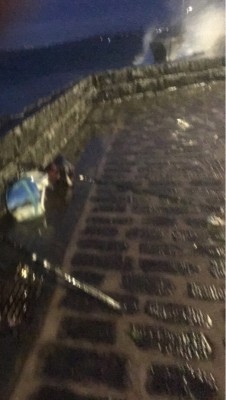 I decided to head to Mornington last night seeing as I couldn’t go out in the yak.
30 Kt Westerly, fairly blowy with waves breaking over the rails & walls.
loaded my 12Ft Rod with a big squid bait and chucked as hard as I could against wind waves etc .
My first rods in the water less than 10 mins and just as a wave breaks over the wall & wind pushes the rod sideways I grab the Rod to stabilise it.
Darn it’s Fowled on weeds or rocks. I move away from where it’s snagged & move towards a less sheltered spot dodging the waves coming over.
It still doesn’t seem to budge but hang on there’s a thump thump going on ???
I point the rod away from the rocks towards the end of the pier and Yes it’s on a - fish.
I manage to bring it back towards the section of rock wall timing the wave action to get it closer until I get it between the Rock wall and newer section of the pier there’s a gap. I wait for the next big wave to come crashing over the rail towards me and use the waves momentum to bring the fish up and over the ledge. I was just hoping the leader or knot wasn’t going to Snap.
No Snap - Yesss Yesss and I don’t care about being half drenched and on the board is a nice 47cm Pinky.
I tried for about another half an hour but in my excitement and rush to go fishing, I had forgotten my rain pants, so my jeans & boots were drenched from the waves.
The waves & wind keep pushing my line sideways into rocks & weeds, so after losing 2 sets of hook n sinker I decided I’m heading home quite happy with my results & back home before 10pm.

" For Evil to triumph, all that Good people have to do is - Nothing "
Top
Remove these ads.

Worth getting soaked
Top

well done mate, a westerley at mornington is prime for landbased snapper..
thanks for sharing.
cheers
Small Fish Specialist

Wow, awarded for the effort. Well done!
Dayumn, am I the only one in this forum that haven't caught a red??

You definitely Fished and Didn't Missed on this occasion

Dayumn, am I the only one in this forum that haven't caught a red??


The answer is No!!! .. You have my company and our long lost pal called Al ... oooppsss Jason i meant

Return to “Mornington To Dromana”