Paulanderson wrote: ↑
Tue Oct 29, 2019 6:02 pm
Members have made some good contributions to this post. Some members would be surprised at just what a shark can do to wire during a long fight. We ended up, after losing several sharks on 200 lb wire, settling on 400 lb braided stainless wire (not nylon coated). Even then we had a large Mako wear through this wire after an hours fight. So my advice is that if you are going to target sharks such as Bronzies I would give 80 to 100 lb trace a miss and go heavier. There are some large Bronzies in PPB and WPB and if you do hook one of these a light wire trace is likely to get bitten/worn through.

Anything that bites through light wire, you really probably aren't going to land on the general everyday spin gear, that most ppl use from the shore around the area. So in reality it's 6 of 1 half dozen of the other so to speak.
For casting 80 to probably 200lb is def usable and probably recommended(at least by me anyway).
For paddling baits out or on a boat, then yes a lot higher breaking strain is recommended. My 50w runs 50lb mono line to a 200lb mono wind on to a 200kg wire trace of 4.5m long, with a 20/0 circle hook, no way I would or could cast that.


Yes, I totally agree, for anyone serious about Shark Fishing, they need to up the anti in all manner. Poundage of wire, quality of a good crimping setup, quality of terminal tackle, decent rated mainline, basically all the gear that is being used.

Just in case any misconception may have been given. My post is only "entry level" stuff. The basic concepts are there but at 90 lb, you wouldn't want anything lighter but definitely need to ramp it up for serious fishing.

I'm more an entry level hack at wire and crimping

Don & I use 90 lb wire for a few reasons:
* Our gear won't cope with what is required to fight a fish that needs 400 lb wire, nor would our "clacker valve" cope with landing a Mike Tyson of a Bronzie with people biting teeth.
* At 90 lb, we can fight the smaller units like Schoolies but still have a Surf Rig that can still entice a Mullie.
* If a BIG unit turns up, we put a lot of hurt into it, to eventually bust off rather than getting spooled with our 30 lb mainline, spin outfits. Yes they are Penn 950 Ssm Spinfishers but they are still limited. So anything for us over 90 lb wire is pointless for us.
* And at $20 setup costs and $10 a pack of wire and crimps, it is a good entry level wire setup.


So having a few of these wire traces in a Surf Tacklebox, are good to give you a fighting chance if a few small Schoolies & Bronzies turn up BUT in no way able to tackle serious shark fishing like large Bronzies. The Swivel (although large) is a big give away of entry level, but functional for 90 lb. 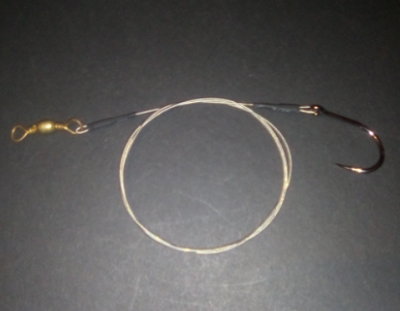 So to anyone wanting to get into wire traces, by post is "entry level" only and just highlights the basics of how to make a wire trace. Ramp it up to your style of desired fishing


Cheers, Bugatti (I don't carry enough underpants to land even one Large Bronzie